Virgin Blue and Etihad Airways announced plans to expand their alliance to potentially include purchasing, engineering support and aircraft acquisitions as they seek to reduce costs, according to a joint interview with Virgin Blue CEO John Borghetti and Etihad CEO James Hogan in The Australian. Virgin Blue shares advanced 1.1% to AUD0.46 cents on Friday.

Also in the Australian market and Qantas stated it may ground its fleet of A380s for “several more weeks” as it continues to check engines on the jets. Qantas Airways shares lost 2.6% to AUD2.66 on Friday.

Skymark to configure A380s with premium economy and business seats

In Japan, Skymark Airlines President and 49% owner Shinichi Nishikubo stated the carrier expects annual sales of around JPY15 billion (USD180 million) for an operating income of around JPY2.2 billion (USD26 million) on the proposed Tokyo-London A380 service. The carrier expects to make a profit on the route in the first 12 months after starting the A380 London services in Nov-2014. Mr Nishikubo stated the carrier will configure its A380s with 114 business-class seats on the upper deck and 280 premium economy seats on the lower deck. Mr Nishikubo added that the carrier intends to purchase two A380s with cash and will arrange leases for the other two firm orders with EADS.

Skymark, which is listed on the start-up Mothers section of the Tokyo Stock Exchange, fell 1.5% to JPY848 on 19-Nov-2010. The shares have fallen 10% since it announced plans to buy A380s and start international scheduled service.

Also in North Asia and a stronger South Korean won boosted airlines on expectations it may help lower the cost of importing jet fuel, while stoking appetite for overseas tours. Shares in Korean Air Lines advanced 2.9% while Asiana Airlines advanced 4.2%. Seoul shares ended up 0.7% on Friday.

In India, the Competition Commission of India (CCI) reportedly imposed a fine of INR1 crore (USD220,288) on Kingfisher Airlines for not providing information sought by the CCI during the investigation into the carrier's proposed strategic agreement with Jet Airways. Kingfisher previously challenged the jurisdiction of CCI to inquire into the strategic agreement with Jet in the Bombay High Court and in the Supreme Court. Shares in Kingfisher Airliesn declined 4.2% on Friday with Jet Airways shares 39% weaker. 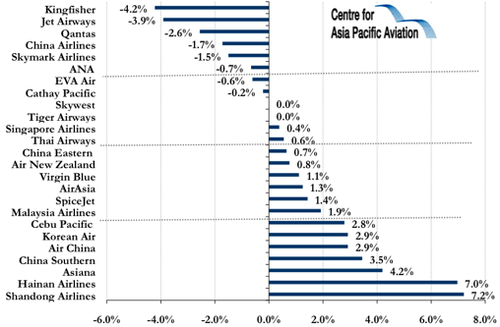