ANA “cautiously optimistic” as recovery continues, but pricing under pressure

All Nippon Airways (ANA) revealed a widening of losses in the fourth quarter and FY2010/11 on Friday, but its shares rose 2.1% as the carrier proposed the resumption of dividend payments and talked of an improving outlook. See related report: ANA enters earnings sweet spot after tough 2009

Chinese airline stocks soared on prospects for further government financial injections, this time for the cargo sector. The CAAC reportedly stated it supports the State-owned Assets Supervision and Administration Commission’s push for the consolidation and integration of the cargo operations of China’s 'Big Three' airlines and will reportedly inject “considerable” capital in the potential establishment of a new cargo company to challenge foreign rivals and capture growth opportunities.

The Chairman of China Southern Airlines (+4.4%), Si Xianmin, reportedly stated that the carrier plans to expedite the integration of its cargo operations with that of future SkyTeam partner, China Eastern Airlines (+5.5%), and has received full support from CAAC. 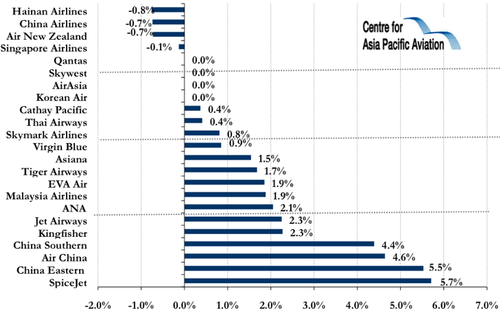