Although it is not required to report its financial results, Virgin America revealed it narrowed its net loss in the fiscal first quarter of 2010 by 11.9% to USD35.5 million while posting a record revenue performance. Unit revenue rose by 21% to USD 8.29 cents while revenues jumped 46% to USD147 million. Passenger revenue per available seat mile rose 15.5 points to USD 7.45 cents. Yield rose 11.2% to USD 9.83 cents. 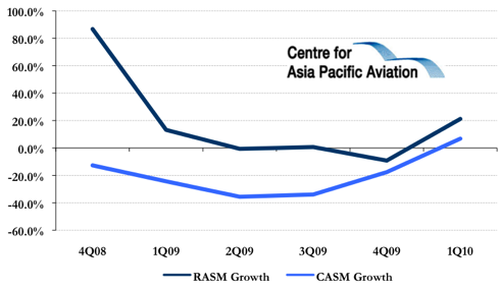 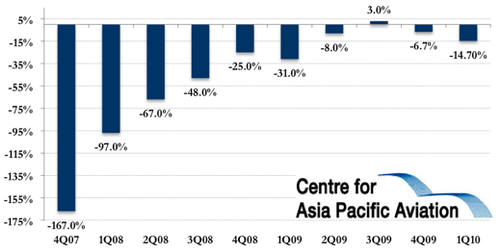 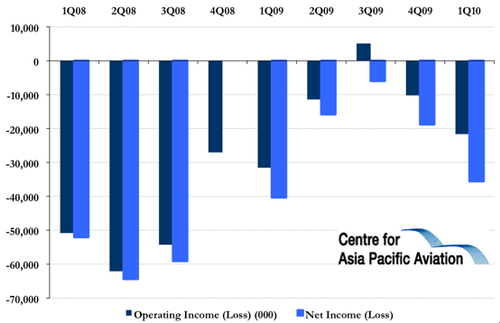 “Despite the near doubling of fuel costs during the quarter, our top line progress continues to exceed our expectations and we remain on track for a full-year operating profit in 2010,” said President and CEO David Cush, adding that had fuel prices remained constant the carrier would have posted an operating profit.  “With a revenue increase of nearly 50% year-over-year and a unique service that is continuing to hit the mark with consumers, we’re pleased with our results.  Our progress is a testament to our business model, the growing loyalty of our guests and the dedication of our entrepreneurial team.” 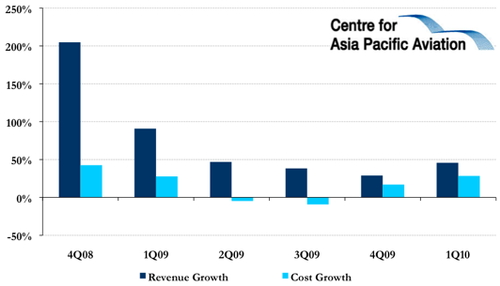 The carrier reported strong load factors – 76% in the first quarter, up 3.8 points – despite a 27% increase in scheduled capacity. Virgin America’s stage-length adjusted guest unit revenue was up 20% versus the first quarter of 2009, a period in which the industry’s unit revenue grew 10%. Ancillary and other revenue streams rose by 41% year on year. 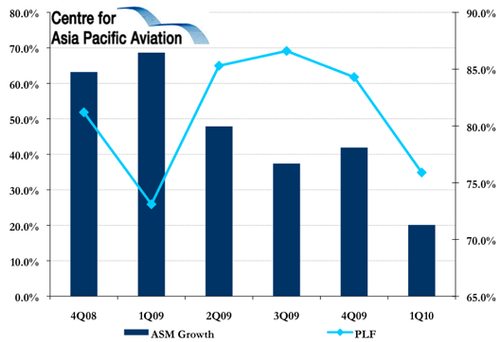 Expenses totaled USD168.4 million, up 28.3%. However, Virgin America said costs dropped about 11% despite the increased capacity. The airline ended the 1Q-2010 with USD28 million in unrestricted cash and USD102 million in total liquidity. Cost per available seat mile rose 6.8% to USD 9.51 cents while CASM ex-fuel dropped 10.6% to USD 6.43 cents. While fuel prices increased 72%, Virgin America continued to hedge, with 70% of its fuel consumption hedged during the quarter and 85% of its projected fuel requirements for 2010 at an average crude call strike of USD85 a barrel.  Echoing other airlines in the US, it also reported that traffic, bookings and average fares are buoying second quarter results.

The carrier expects to add five new destinations this year – including Orlando and Toronto – and by the end of 1Q2011 its fleet is expected to grow by one third and another two thirds by year-end 2012.

“We’re optimistic about the improving revenue environment and look forward to expanding to five new destinations in 2010 and creating over 500 additional new jobs a year as we grow,” added Cush.

Although Virgin America does not yet meet the size threshold to be classified a “major” carrier by the US Department of Transportation, the airline tracks its on-time performance, baggage handling and other key operational statistics in advance of the DoT’s requirement to report.  For the first quarter of 2010, Virgin America achieved an 83.4% cumulative A-14 on-time ranking, which placed the carrier third for on-time performance among all US carriers for the quarter.  Virgin America also outperformed the majority of the industry with a 99.1% completion factor, which placed it fourth among US carriers when compared with the DoT’s data.  The airline’s baggage handling rate for the first quarter was 1.05 mishandled baggage reports per 1000 guests, which placed it first among US carriers for reliability when compared with DoT data.