The carrier also reported a net loss of USD5.9 million in the three month period, a significant improvement from a USD59 million loss in the previous corresponding period.

Also in the US, Southwest Airlines and AirTran were among the US airlines benefiting from the eighth straight reduction in oil prices, with shares in the LCCs gaining 6.7% and 4.4%, respectively, on Friday. 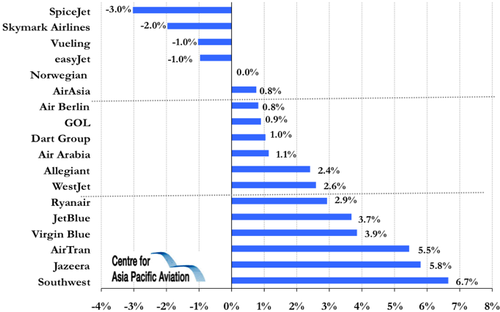 In Europe, Flyglobespan denied reports that it was on the "cusp of collapse", with Founder and Chairman, Tom Dalrymple, stating the company is on the verge of concluding a major funding deal with Halcyon Investments.

The Edinburgh-based carrier has not disclosed the size of the deal, but stated the cash would allow the firm to "prosper and grow". However, the airline has yet to receive the funds by Halcyon Investments (reportedly the investment vehicle controlled by E-Clear), as it is still waiting for "regulatory approval" for the transaction.

easyJet’s shares shed 1.0% on Friday, extending Thursday’s 2.8% decline, which followed news that CEO, Andy Harrison, would resign from the company in 2010.

Cazenove reduced the carrier’s rating from ‘outperform’ to ‘in-line’, stating the “unexpected announcement of the departure of Andy Harrison, CEO, in Jun-2010 is a blow to the company in our view”, adding, “we have a high regard for his achievements during his time at easyJet and he will be a loss to the company”.

The broker added that the news creates uncertainty that is likely to hang over easyJet's share price performance until it is resolved. Cazenove also expressed concern regarding the carrier’s plans to growth capacity by 10% over the European Winter compared to a capacity increase of approximately 3% over the Summer), stating the carrier is unlikely to make a profit until late in the European Spring.

Shares in Ryanair gained 2.9%, buoyed by an upgrade by Cazenove, from “in-line” to “outperform”. Cazenove stated that regardless of an outcome related to a further Boeing order, it expects Ryanair to be able to generate significant earnings growth in the coming years.

Vueling’s shares slipped 1.0% on Friday, as the carrier stated it reported a 2.3 ppt load factor improvement to 67.6% in Nov-2009. The carrier handled slightly below 744,000 passengers, although no year-on-year comparison was provided.