Virgin America has followed through on previous declarations that it could begin service to Hawaii by YE2015 with the firming of plans to launch flights from San Francisco to Honolulu and Maui during 4Q2015.

The airline is entering a crowded market with ample existing service from all three airports serving the San Francisco Bay area – San Francisco international, Oakland and San Jose. Virgin America is well aware of those competitive dynamics; but has concluded that the market can absorb more capacity.

Virgin America is opting to enter the Hawaiian market as it faces tough conditions in transcon markets during 2015 and with its new Dallas Love Field flights. At the same time its stock price has dropped and its unit costs are forecast to rise.  All those factors are creating headwinds for Virgin America as it works to sustain its profitability in 2015.

During 1Q2015 Virgin America hinted that a service launch to Hawaii in 2015 was a distinct possibility, noting that the earliest start date would be Oct-2015. Now the airline has firmed those plans, opting to introduce service from its largest base and headquarters in San Francisco to Honolulu in Nov-2015 followed by Maui in Dec-2015.

Data from CAPA and OAG show that each of those markets from San Francisco and other Bay area airports are served significantly by other airlines. United, Hawaiian and Delta all operate from San Francisco to Honolulu, and one-way seats on offer for the week of 6-Apr-2015 are up 8% year-on-year to approximately 10,000. United has a 71% share of the seats, Hawaiian 20% and Delta 9%. 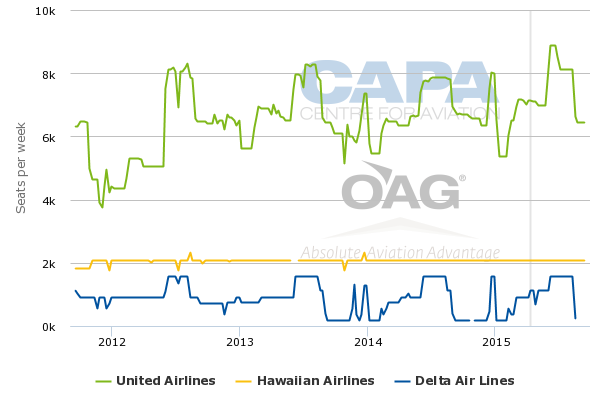 Seats between San Francisco and Maui (Kaluhui) have increased nearly 108% year-on-year to approximately 6,900 for the week of 6-Apr-2015 after Hawaiian joined United in serving the market in late 2014. United holds a 70% share and Hawaiian represents nearly 30% of the seats on offer. 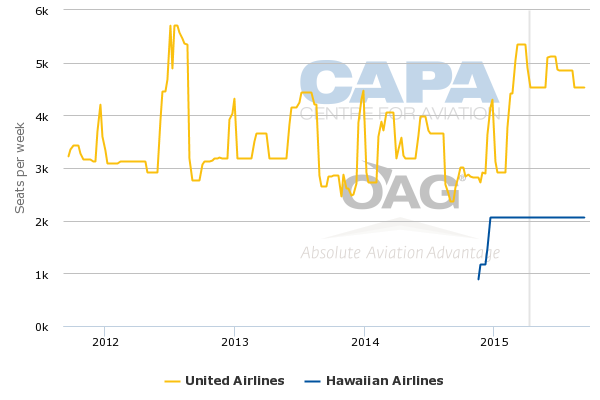 Alaska and Hawaiian also operate service from Oakland and San Jose to Honolulu and Maui. Seat numbers on offer between Oakland and Honolulu are flat year-on-year at approximately 2,300, with Hawaiian holding an 80% share and Alaska accounting for 20% of the seats.

Between Oakland and Maui, seats are also flat year-on-year at roughly 2,950. Hawaiian holds a 67% share and Alaska represents the remaining 37%. 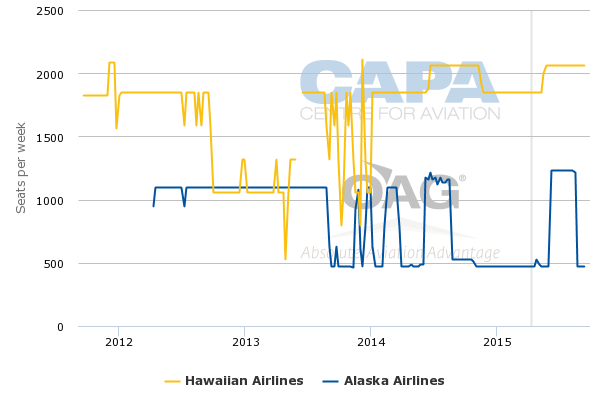 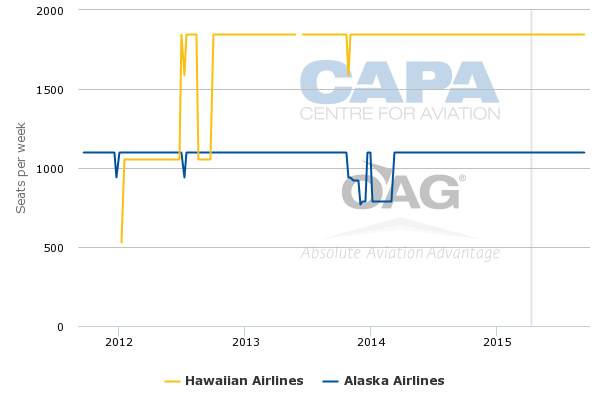 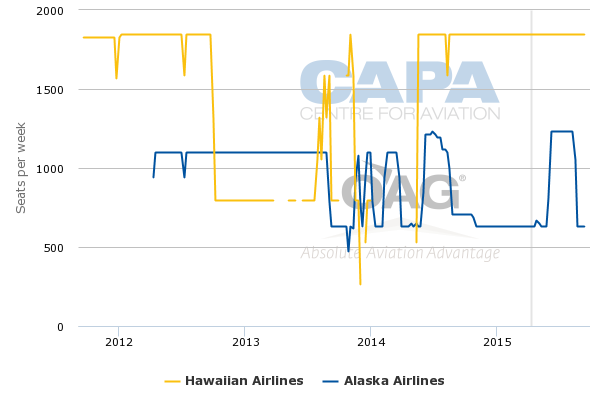 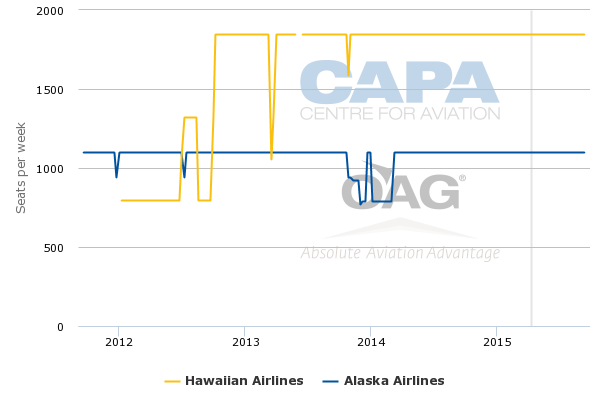 Virgin America is initiating new competition with codeshare partner Hawaiian on the new service to Hawaii. The two airlines have operated under a codesharing pact since 2012 which entails Hawaiian placing its codes on several of Virgin America’s mainland destinations.

With so much service already available from the Bay area to Hawaii, Virgin America’s move into the market is intriguing given that oversupply has occurred regularly from the US mainland to Hawaii during the last few years.

But Virgin America is retaining a sense of bullishness on the market, previously declaring that the capacity deployed between the two regions is being absorbed, and that there is point of sales strength for the Hawaiian market in San Francisco. During Mar-2015, Virgin America estimated that Honolulu was one of the top 20 domestic markets from San Francisco that it did not serve, and the market generated roughly 551 passengers per day each way. 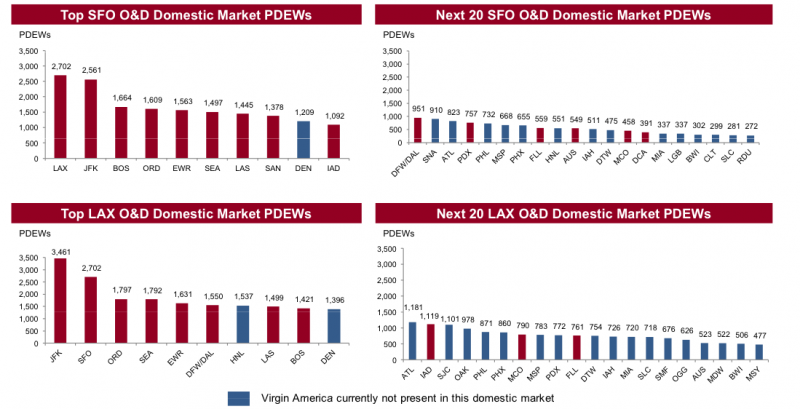 Honolulu is the seventh largest domestic market from Virgin America’s second largest base in Los Angeles, which could indicate the airline is also setting its sights on service on the pairing.

At the time Virgin America announced new Hawaii service, CEO David Cush told the Pacific Business News that the airline would seek to add service from Los Angeles to Honolulu and Maui at some point. 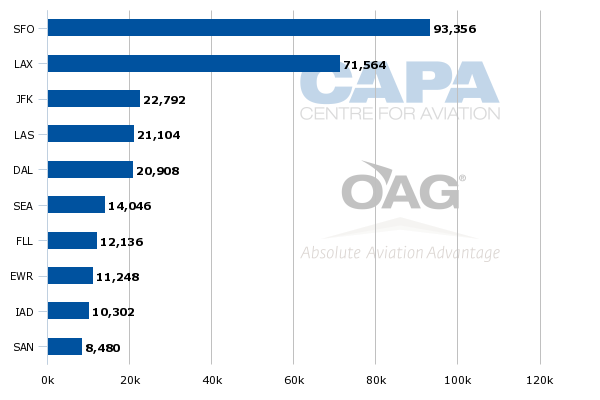 Mr Cush declared to the Associated Press that Virgin America’s new flights to Hawaii would be profitable within a year, which is somewhat of a bold declaration given the density that already exists in the market. Virgin America does have significant brand awareness in San Francisco, but added to the regular expense of beginning a route and spooling it to maturity is the task of completing all the necessary requirements for regulatory approval to operate to Hawaii. Virgin America has done some preparation in that regard, but it does still add a layer of complexity to the new route launch.

Virgin America enters Hawaii amidst pressure elsewhere in its network

Virgin America no doubt has a loyal following in the San Francisco area, and a differentiated product. Its business model is based on offering that product at a lower price point than legacy airlines. But Virgin America faces cost creep in 2015, with projected unit cost growth excluding fuel of 4% to 6% in 2015 as it aligns employee wages to industry averages.

Its cost headwinds alongside some tough operating dynamics elsewhere in its network could make it difficult for Virgin America to deliver on its stated goal of profitable Hawaiian operations within a year.

Virgin America has admitted that pricing dilution is occurring in the transcon markets from New York to San Francisco and Los Angeles with the debut of JetBlue’s premium product Mint, which has forced Virgin America to participate in the lower pricing dynamic to retain its customers.

The challenges in the transcon markets are likely to linger as JetBlue recently stated that in the summer of 2015 its daily flights from its New York JFK to Los Angeles will grow to eight from roughly three-to-four a year ago. Its flights from JFK to San Francisco are growing to five from two-to-three.

Virgin America has also outlined challenges in the Dallas market where it has launched flights from Love Field to New York LaGuardia, San Francisco and Los Angeles. New service to Austin starts in Apr-2015. With Southwest’s push from its Love Field headquarters after the lifting of the Wright Amendment that prohibited certain long haul flights from the airport, capacity has grown and fares have fallen. At one point Virgin America was citing double-digit fares to Washington and New York.

All of this means a good deal of Virgin America’s supply is under some form of pricing pressure, which seems to be entrenched for at least 1H2015.

Since its debut as a publicly traded company in Nov-2014, Virgin America’s stock price reached USD45 before settling at USD29 on 9-Apr-2015. Some of the decline is likely attributed to the excitement of the IPO fading, but some of the decrease could reflect some investor wariness about the competitive dynamics Virgin America faces in the short term.

The pressure in transcon markets and Dallas along with the investment in Hawaii make it difficult to predict if Virgin America can effectively weather the headwinds it faces in 2015. But if the airline’s confidence is any measure of how it will perform for the year, Virgin America should should deliver a favourable performance.