Flughafen Wien Group, owner and operator of Vienna International Airport, traded down 1.7% yesterday, amidst generally weaker markets, as it reported a 9.4% drop in revenue and a 22.3% fall in net profit for 3Q2009.

However, the results are an improvement over heavy falls seen in revenue and profits in early quarters this year. For the nine months to 30-Sep-2009, the company reported a 10.4% drop in revenue and a 28.4% drop in net profit.

The airport reported a slower decline in traffic during 3Q2009, and traffic figures are improving as the year draws to a close. Traffic data for Oct-2009 showed a “substantially slower decline in all traffic segments”, down just 2.9% year-on-year. The share of passengers handled by the Austrian Airlines Group at the airport continued to decline, totaling 49.4% for the first nine months.

Meanwhile, MAp fell 0.4% after reporting the following traffic highlights for its investment airports for Oct-2009, highlighting the “ongoing recovery” across its protfolio:

Chinese airports were prevalent in the positive share performers yesterday, with Guangzhou Baiyun (+0.7%), Xiamen (+0.8%) and Shenzhen (+1.1%) all up. Turkish airport operator, TAV Airports, was also up, gaining 1.5%. 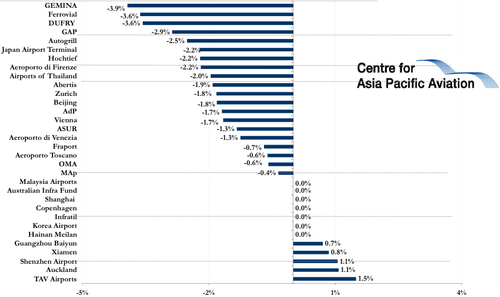