In the latest development, the struggling airline, which was recently taken over by Lufthansa Group, announced plans to reduce its workforce by a further 500 positions as it looks to improve its bottom line performance. The carrier is also currently in talks with Vienna Airport to negotiate lower prices for services at the airport.

Elsewhere in Europe, Aeroports de Paris and Fraport’s shares continued to ease, falling 0.7% and 0.3%, respectively, while Ferrovial continued its recent ascent, gaining 2.0% in trading on Friday.

In the Asia Pacific region, Macquarie Airports’ shares have sustained a strong performance since the announcement of its internationalisation plans in Jul-2009, gaining 0.7% on Friday.

Hainan Airport’s shares also closed the week on a high, jumping 3.3% on Friday. Elsewhere in the region, Malaysia Airports (-2.9%) and Xiamen Airport (-2.3%) eased. 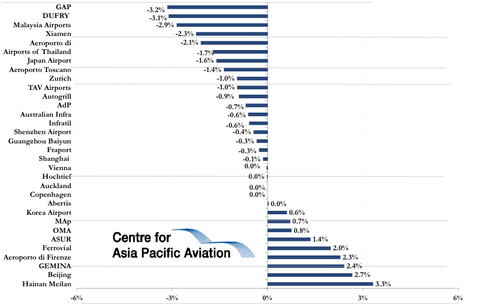