The Hong-Kong based carrier commented that the “seasonal upturn” in passenger business that emerged in Sep-2009 “continued through into last month”. During the month, passenger numbers were down 3.9% to 2.0 million, while load factors were up strongly, by 6.8 ppts to 82.3%.

The carrier added that it experienced a “pick-up” in premium traffic, due to events including the Canton Fair, but added that “volumes and yields were still below October 2008, when the financial crisis had already begun to have an impact”. 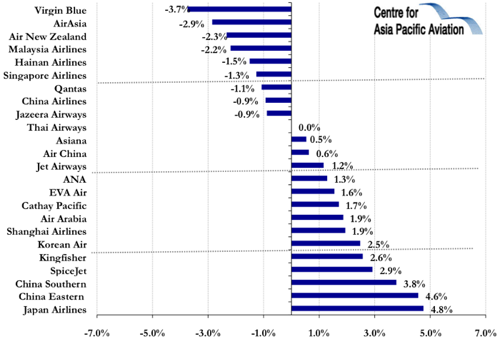 On the cargo front, Cathay stated the Oct-2009 was the “best month of the year so far for our cargo business”, with only a 0.8% contraction in cargo volumes in the month, with the carrier added that strong demand from its key Hong Kong and Shanghai markets lead to a “welcome increase in yield” and high load factors, particularly to North America and Europe,” and”.

Cathay demand expected to remain strong over next month

Looking forward, General Manager - Cargo Sales & Marketing, Titus Diu, stated the carrier expects “demand to remain strong through to mid-December”, but added that it is “still too early to say whether we are seeing a sustained recovery,”

Singapore Airlines shares, meanwhile, slipped 1.3% as the carrier stated it may reintroduce some capacity following improved in travel demand. The airline, which traditionally generates approximately 40% of total revenue from premium travellers, added that it is seeing a “definitive pickup in bookings in business class”. The carrier added that it expects load factors of approximately 80% as the global economic situation improves and stated that it does not see a need for a second round of cost cuts.

In the South Pacific, Qantas share were down 1.1% yesterday, as Qantas CEO, Alan Joyce stated the carrier is “not seeing an improvement in business traffic”, with yields “still depressed internationally”, and down by approximately 20% year-on-year at present. Mr Joyce added that lower yields would ''take some time to wash out of the system” as the carrier still has “a lot of cheap air fares in our inventory”.

On a more positive note, Mr Joyce stated leisure demand is improving, enabling the carrier to increase its domestic air fares, with load factors also remaining strong, currently at an average of 84%.

JAL shares up, as Government involvement in recovery efforts increases

Also in the North Asian market, Japan Airlines’ shares gained yesterday, up 4.8%, for the largest increase in almost two weeks, after the Japanese Government stated the Development Bank of Japan would provide a loan for the struggling carrier and laws may be introduced to enable the carrier to reduce its pension liabilities.