Continued positive trends in passenger yields and unit revenues were reported in Feb-2011, linked to a recovery of high-fare business travel demand. However, despite improvements in the demand and yield environment, carriers are now facing a new challenge in escalating fuel costs with this pressure resulting in some of the majors announcing capacity growth reductions in the months ahead.

North American carriers are expected to deliver USD3.2 billion in profits in 2011 for a net profit margin of 4.0%, according to IATA, down from the USD4.7 billion profit made in 2010.  Higher oil prices will damage profitability in 2011, but earlier cuts in capacity have led to much stronger conditions for yields than elsewhere. The US economy has also been stronger than expected.

More than a year of revenue growth for US carriers: ATA

The Air Transport Association of America (ATA) reported that passenger revenue, based on a sample group of carriers, rose 10% in Jan-2011, marking the 13th consecutive month of revenue growth and reflecting the ongoing strengthened demand for air travel as airlines enter 2011. Miles flown by paying passengers rose 2.5% while the average price to fly one mile rose 7.2%. Domestic revenue grew 6.7%, fuelled in large part by a 6.3% increase in yield. International market performance remains strong as passenger revenue grew 16%, led in particular by a 30% increase in Pacific revenue. 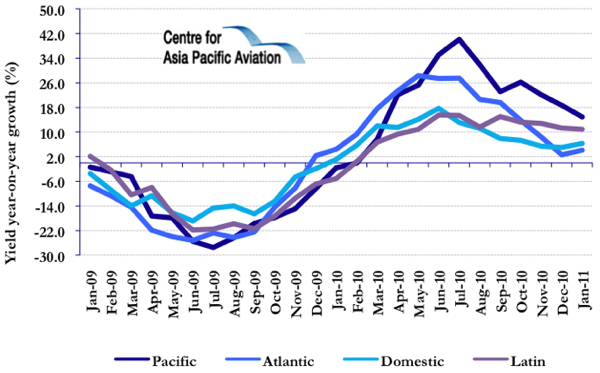 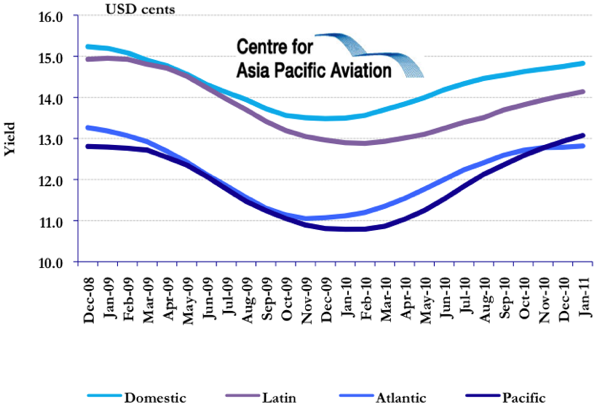 “Despite the severe winter storms that disrupted airline operations throughout the country, January’s revenue performance was quite good, fueled principally by a stronger economy in relation to capacity. While revenue performance is improving, carriers are challenged by the price of fuel – their single largest expense – which this week hit the highest level since 1-Oct-2008," ATA Vice President and Chief Economist John Heimlich said.

Meanwhile, ARC, the financial settlement link between airlines and travel sellers, stated airline tickets sold by US-based agencies increased 11.22% year-on-year for the first two months of 2011, with a 26% increase over the same period in 2009. January-February ticket sales totalled USD13.5 billion in 2011, compared with USD12.2 billion in 2010 and USD10.7 billion in 2009.

Like IATA, ATA noted the negative impact of fuel prices. Mr Heimlich stated airlines in 2011 are contending with rapidly climbing jet-fuel prices that have outpaced crude-oil prices to reach their highest level since Sep-2008.

ATA stated that, excluding hedge gains or losses, if US airlines had to contend with USD3 per gallon jet-fuel prices for all of 2011, their fuel bill would increase USD15 billion, from USD39 billion in 2010 to an estimated USD54 billion in 2011.  Annually, a USD 0.01 cent increase in a gallon costs US airlines USD175 million with a USD1 increase in a barrel to cost them ISD415 million.

US Airways' President Scott Kirby, announcing the carrier’s Feb-2011 traffic results, commented that the  “demand environment during February was exceptionally strong and we believe the run rate PRASM increase US Airways experienced through the end of the month will be sufficient to fully offset the increase in fuel prices reflected in the forward fuel curve as of 28-Feb-2011".

JetBlue's PRASM) in the month increased 18% year-on-year. Approximately three points of this increase are attributable to the impact of severe weather in the north-east at the beginning of the month, which resulted in a lower-than-expected completion factor. For 1Q2011, PRASM is expected to increase between 14% and 16% year-on-year. JetBlue's preliminary completion factor was 95.0% and its OTP performance rate was 65.5% in the month.

Due to the recent increase in fuel prices and as part of efforts to maintain the positive yield trajectory, a number of US carriers have announced capacity growth reductions in recent weeks. 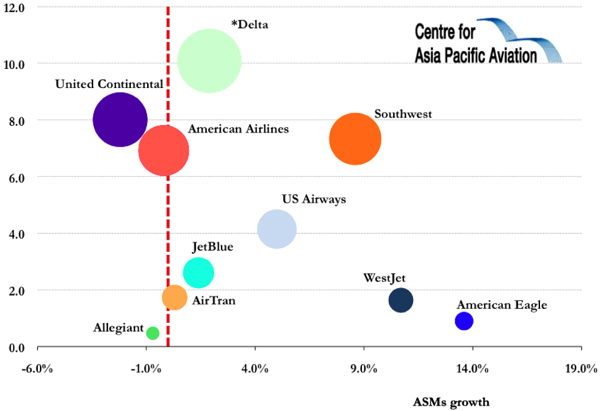 United Continental announced plans to reduce consolidated capacity from its previous 2011 projections by approximately 1%, effective with its May-2011 schedule and by 4% from its Sep-2011 schedule. With these reductions, 4Q2011 consolidated domestic capacity is expected to decrease 5% and consolidated international capacity is expected to increase 2% compared with the pro forma capacity for the same period last year. The capacity changes will be accomplished through reducing flight frequencies, indefinitely postponing the start of flights to certain markets and exiting less profitable routes.

With those reductions, United said its 2011 consolidated capacity will be roughly flat with 2010, but down from its prior forecast of an increase of 1% to 2%.  United expects its international capacity to grow by 2.5% to 3.5% this year and its domestic capacity to decline 1.5% to 2.5% from 2010. In Jan-2011, the largest airline said it expected its international capacity to increase 4.5% to 5.5% in 2011 and domestic capacity to shrink by 0.5% to 1.5%.  Concurrent with the capacity reductions, the company is also analyzing the removal of certain less fuel-efficient aircraft from its fleet and will be taking other cost saving measures.

Delta Air Lines last month downgraded its 1Q2011 capacity guidance to growth of 3-5%, down from forecasts of 5-7%. Meanwhile, American Airlines stated it would trim its capacity plans by 1 ppt from the previous guidance as the industry tries to offset rising fuel costs with fewer flights and higher fares. The carrier, in Jan-2011, had stated that consolidated capacity would by 3.6% up from 2010 levels in 2011.

The traffic (RPMs) trends in Feb-2011 were slightly mixed, with the nation’s two largest carriers  - Delta and United Continental – reporting traffic reductions, as was the case at Republic. American Airlines’ traffic remained unchanged year-on-year while all the US LCC reported traffic growth. 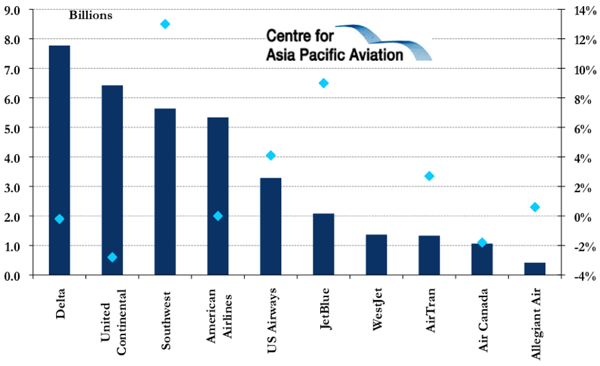 Load factors not as strong as 2010 but still solid

Load factors in Feb-2011 were not as strong as the record load factor results witnessed in 2010, but generally remain strong. Delta, United Continental and US Airways all witnessed domestic load factor reductions while Southwest Airlines continued to report load factor improvements, with growth of 3.0 ppts. 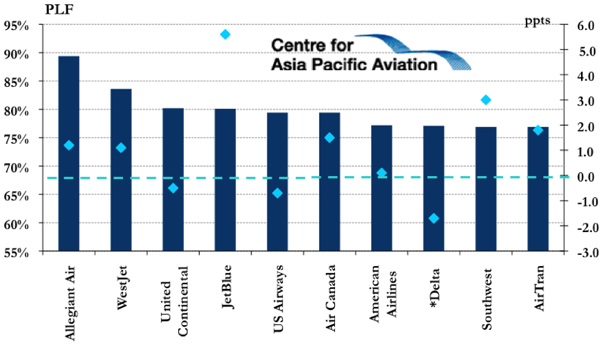 The highest load factor results were reported by Allegiant, with Alaska, US Airways, JetBlue and United Continental all reported domestic load factors of above 80%.

US carriers to continue careful capacity growth to protect yields `

In Canada, WsetJet President and CEO Gregg Saretsky stated overall year-to-date consumer demand has been strong which has supported the fare increases needed to help offset rising fuel costs. "Business bookings continue to show strength as we move forward in 2011. The recent announcement of our code-share agreement with American Airlines will attract more business travellers, and support our upcoming schedule and service increases into the eastern triangle,” he said.

Meanwhile, Air Canada has announced a reduction in its previously communicated plans for 2011 system capacity growth in light of sustained high fuel costs.

The reduction in system wide capacity will mostly impact the remaining quarters in the year and will be achieved through reductions in frequency, down gauge of aircraft and suspension of the following routes no longer profitable in the current high fuel price environment, effective 01-May-2011: Ottawa-Thunder Bay, Ottawa-Washington Dulles, Montreal-Washington Dulles, Calgary-Chicago, Calgary-San Francisco and Calgary-London, Ontario. Customers will be offered alternate flights or routings as options.

As previously projected, Air Canada continues to expect its CASM, excluding fuel, for 2011 to decline by up to 2.0% as compared to 2010, as the reduced rate of capacity growth is expected to be offset mainly by a Canadian dollar stronger than originally assumed. Air Canada continues to expect that CASM, excluding fuel, for 1Q2011 will decline by between 4.0% to 5.0%. 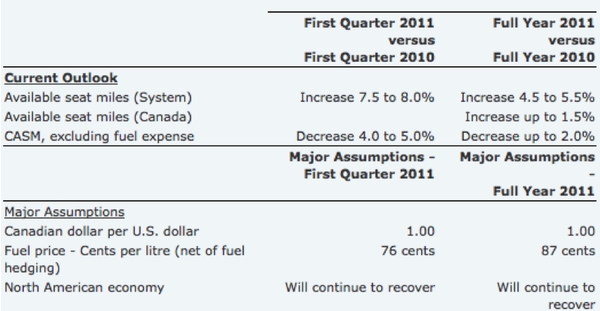 North America carriers continue to be cautious in their capacity plans for 2011, with 2010 showing that careful capacity management can have a positive effect on load factors, yields and profitability. This focus on the protection of yields has become increasing important again as escalating fuel costs threaten the global aviation industry’s profits.