Costs faced by US passenger airlines, measured by the “composite cost index”, rose 5% to 209.8 in the third quarter of 2010 compared with the same period of 2009, outpacing the 1.2% gain in the US Consumer Price Index (CPI), said ATA. The composite airline cost index remains approximately 110% higher than its level of 100 in 2000.

"The third-quarter results highlight the continued importance of offsetting the rising costs of doing business through operational efficiencies, productivity gains and diversification of revenue streams. Thanks to a strengthening economy and the continuing efforts of airlines to adapt to a volatile environment, the increase in costs did not stand in the way of profitability this quarter,” said ATA Chief Economist John Heimlich. “Nonetheless, with costs likely to continue rising in this period of economic uncertainty, financial discipline remains paramount.”

It certainly makes American’s fight to reduce costs for online travel agents and global distribution systems more critical. American Chair Gerald Arpey said during the first half of 2010 that he wants to see OTAs and GDS pay the airline for being allowed to use its content making that the holy grail for the airline industry.

Fuel, labour and regional outsourcing costs account for the three largest components in the composite cost index and show fuel efficiency, labour productivity and revenue generation offset higher composite costs and pushed break-even load factor down 8.7 points to 75.9%. Those metrics were 7.3 points and 73.7% in 3Q2009. ATA also said the break-even load factor was the lowest since 1Q2001 and enabled the first consecutive quarters of profitability since the middle of 2007.

Despite the downward pressure on transportation-related expenses – monies paid to regional airline partners for capacity lift – such costs were up 13.9%.

It also recounted other findings:

Labour costs will continue to rise, something American is counting on as new contracts at Delta, US Airways and United begin to achieve parity with its higher labour costs. 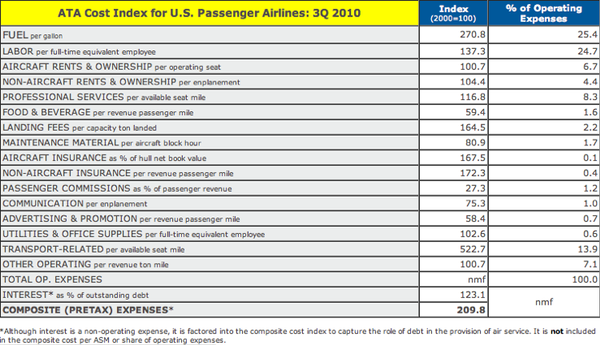