The majority of North and South American carrier’s stocks were up on Wednesday (28-Apr-2010) following reports a United-Continental merger agreement is drawing nearer and better than expected results from US Airways (+15.6%).

Airline stocks were also boosted by gains in the wider market, with the Dow (+0.5%) reversing steep falls the day prior, as the Federal Reserve stated economic activity has “continued to strengthen”. Oil prices (-2.1%) fell to USD82.44.

United Airlines (+6.1%) was up on news it and Continental Airlines (+2.5%) have reportedly moved closer to solving differences in valuing their potential merger, potentially paving the way for an agreement to be reached as early as next week.Continental's Board reportedly met on 28-Apr-2010 to discuss the potential tie-up, with United Airlines directors to meet on 30-Apr-2010.

The carriers have reportedly agreed to an all-stock merger with no premium, although the companies have disagreed over the time period for the ratio of a stock swap. United and Continental are the third and fourth largest US carriers by traffic and combined they would become the world’s largest carrier, surpassing Delta/Northwest. The proposed merger terms also include appointing Continental CEO, Jeff Smisek, as CEO of the combined carrier, and United’s Glenn Tilton as Chairman.

Chairman and CEO, Doug Parker, was upbeat, stating, "we believe we are well positioned for success in a dynamic and improving industry environment". He added, "the steps we have taken to improve our airline - focusing our flying on areas of competitive strength, increasing ancillary revenue generation, establishing industry-leading operating reliability and keeping our costs in check - have clearly made a difference and are now complemented by a much improved industry revenue environment". US Air anticipates a profitable second quarter on continued revenue momentum and cost discipline.

Jesup & Lamont analyst, Helane Becker, raised her rating of the carrier’s stock from ‘Hold’ to ‘Buy’, citing its better than expected results for 1Q2010 and improved liquidity. Jesup & Lamont had expected the carrier to report a loss of USD0.74 per share for the quarter. However, US Airways reported an adjusted loss of only USD0.55 per share and ended the quarter with USD2 billion in capital on its balance sheet, of which USD1.6 billion was unrestricted.

The analyst added she still believes US Airways can be a player in consolidation. Mr Parker commented during trading that "it appears our talks with United may have helped motivate Continental to finally merge with United". US Airways ended discussions on a possible combination with United on 22-Apr-2010. The two carriers were reportedly within days of announcing an agreement before the United-Continental talks were disclosed on 15-Apr-2010.

Expressjet (-4.5%) was also down after reporting a net loss of USD16.1 million for 1Q2010, compared with a loss of USD11.4 million in the corresponding period last year. Interim President, Pat Kelly, stated it is now clear that the carrier will need to continue cutting costs to return to sustained profitability. Operating costs for the period rose 12.7% year-on-year, to USD203.8 million, compared to a 11.5% rise in revenue, to USD189.3 million.

IATA reported during trading that North and Latin American markets saw weak growth in passenger traffic (RPKs) for 1Q2010, growing 5.0% and 8.2%, respectively. This is compared to 25.0% growth in the Middle East.

Mar-2010 passenger traffic growth in Latin American was dampened by the earthquake in Chile, but freight growth remains strong, rising 47.9% for the month. North American airlines are also experiencing strong freight growth for Mar-2010, up 32.2% in contrast to their international passenger business where they have cut capacity. 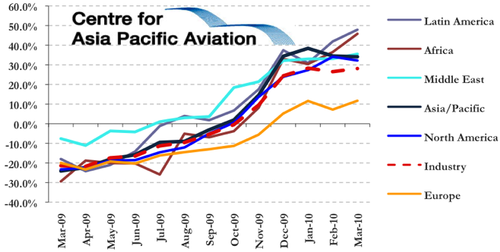 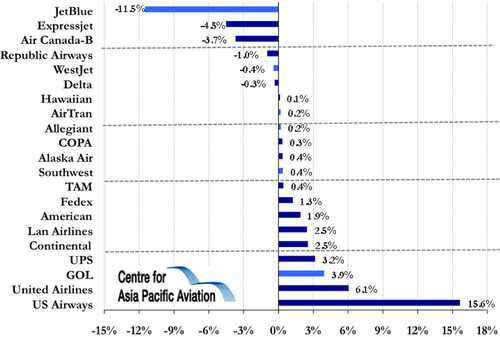