US Airways (+2.3%) made the largest gain on Thursday, on improved PRASM results for Nov-2009. The carrier estimated PRASM fell 2% year-on-year during the month, while total RASM remained flat. According to President, Scott Kirby, “the revenue environment continues to show core sequential improvement with strength in close-in bookings”, adding both booked yields and corporate revenue are now up on a year-over-year basis.

American Airlines (+1.2%) was also up, after it to reported its Nov-2009 traffic results. The carrier reported a 3.0 ppt year-on-year increase in load factor, to 79.6%, as a reduction in capacity (ASMs) outweighed a reduction in traffic (ASKs) for the month, down 4.2% and 0.5%, respectively. Overall, the carrier handled 6.7 million passengers over the month, down 0.5%.

Also during trading, American Airlines, in association with the oneworld alliance, stated they would be willing to provide funding of up to USD1.1 billion to assist Japan Airlines. oneworld added it would attempt to develop an anti-trust immunised (ATI) JV agreement across the Pacific with American, with an application for ATI to be filed immediately after an open skies agreement is reached between Japan and the US.

Delta Air Lines (+1.0%) meanwhile confirmed it, in conjunction with its other SkyTeam members, are ready to offer JAL a financial aid package of approximately USD1 billion, including a USD500 million equity investment. Delta added it is also considering teaming up with a third party investor, such as a private equity fund or venture capital firm, to support the carrier. Delta President, Ed Bastian, added that Delta and its SkyTeam partners would be happy to offer more than the previously announced USD1 billion of financial support, if required.

Air Canada (-2.4%) stocks took the greatest fall on Thursday, ahead of reporting its Nov-2009 results. The carrier announced plans during trading to charge passengers for second baggage. Fellow Canadian carrier, WestJet (-2.1%) was also down, after the LCC stated it expects the launch of its new reservations system in Nov-2009 will cut 4Q2009 revenues by 11%. See related report: WestJet expecting double-digit RASM reduction in 4Q2009; Ryanair pax up 15%; Tiger to launch an IPO

Canadian stocks were also affected by a 1.2% drop in the TSX. 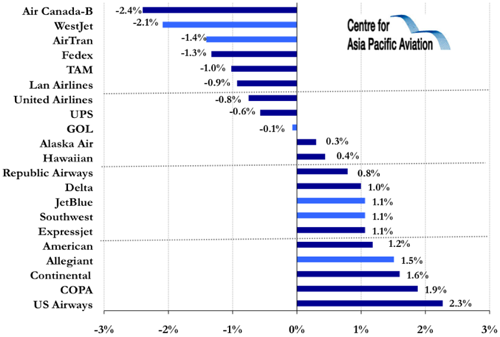