US Airways reports 13% improvement in PRASM; Alaska Air down despite improved traffic

The majority of North and South American carriers’ stocks were down again on Wednesday (05-May-2010) as global markets continued to fall on concerns debt issues in Europe will hamper economic recovery worldwide. The Dow (-0.5%) ended trading lower, despite news of a third consecutive monthly rise in employment in the private sector.

Republic Airways (-6.7%) stock took the largest tumble, after reporting a wider than expected net loss for 1Q2010 of USD36.5 million.

The decline was despite the carrier reporting a 5.0 ppts year-on-year improvement for Apr-2010, to 80%. Passenger numbers rose 59%, to 2.7 million, with the inclusion of Midwest Airlines and Frontier Airways.

Alaska Air down despite improved traffic

US Airways reports 13% improvement in PRASM 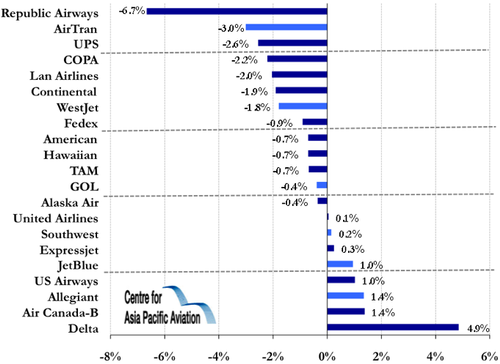