US Airways (-0.6%) declined in a day of mixed trading for North and South American airlines on Friday (03-Dec-2010) despite the carrier reporting a 6% year-on-year rise in revenue per ASM for Nov-2010. The carrier also reported a 3.3 ppt year-on-year improvement in load factor for the month to 80.6%.

Air Canada (-0.8%) also slipped. During trading, ACE Aviation Holdings Inc (ACE Aviation) entered into an agreement with a syndicate of underwriters for a secondary offering on a bought deal basis of 44 million Class B voting shares of Air Canada at an offering price of CAD3.70 per share, for aggregate gross proceeds of CAD162.8 million. The agreement was led by Canaccord Genuity Corp and including RBC Dominion Securities Inc and TD Securities Inc as co-leads. Closing of the offering is expected to occur on 23-Dec-2010. After the offering, ACE Aviation will own 31 million Class B Voting Shares of Air Canada representing 11.15% of the Class A Variable Voting Shares and Class B Voting Shares. ACE Aviation has entered into a 60 day standstill agreement with the underwriters.

Republic Airways (-2.8%) and United Continental Holdings (-1.7%) were also down for Friday. 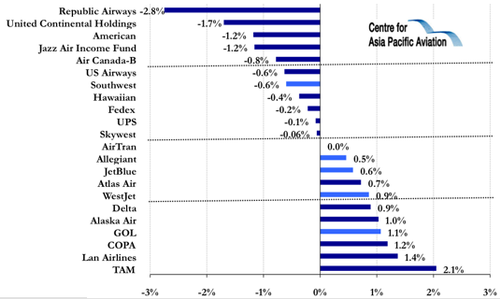