US Airways' profits on the rise

Moody's Investors Service raised its outlook of the carrier from ‘negative’ to ‘stable’ as a result, while also affirming a corporate family rating of ‘Caa1’, citing US Airways’ “stable outlook”. Standard & Poor's meanwhile reiterated their ‘buy’ rating and increased the carrier’s 12 month price target from USD10 to USD12.

American attributed the loss to the impact of significantly higher fuel prices year-on-year. Including the impact of fuel hedging, the carrier paid nearly USD334 million more for jet fuel in the second quarter, at an average of USD2.37 per gallon, than it would have paid at prices prevailing in 2Q2009, when it paid USD1.90 per gallon. 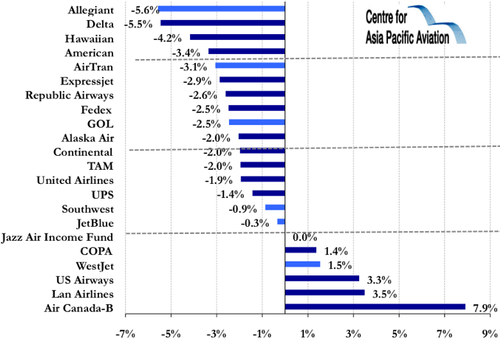