US Airways on 20-Apr-2012 won public endorsement from three of American’s unions for its plan to create a "new American” through the combination of the two companies.

See related article: Union support of US Airways’ quest to take over American is a first step in a long merger process

During a 25-Apr-2012 analyst call to discuss US Airways earnings, carrier president Scott Kirby outlined the term sheets reached with American's unions at a macro level, remarking that the long-touted USD800 million labour costs disadvantage by American relative to its legacy peers was largely due to pensions and productivity. Now, he highlighted, American has sought USD1.25 billion in labour costs reductions in Chapter 11, meaning American’s “ask of labour went beyond the industry average”.

US Airways and the unions agreed that new contracts with American’s employees need not have a competitive advantage or disadvantage to Delta Air Lines and United Airlines. Mr Kirby concludes since the new American will have revenue generating capabilities similar to Delta and United, the merged carrier should have labour costs similar to those airlines.

Yet American's move is understandable. If it wants to have a sustainable position, it cannot just be competitive on labour costs but must exceed. Southwest Airlines is facing similar prospects with the merged United-Continental encroaching on its cost advantage; Southwest has asked employees for higher productivity and other improvements.

In the agreement with US Airways, American’s unions agreed to pension freezes and productivity improvements to allow the merged carrier to position itself competitively against Delta and United.

Mr Kirby stressed the synergies created by the merger would allow employees of the merged airline to enjoy pay rates comparable to Delta and United. More importantly, he stressed, the pay rates are an improvement over what American management is proposing in its standalone plan and as it seeks to void current labour contracts through the bankruptcy process.

His conservative estimate of annual synergies from merger net of labour synergies by combining the two workforces is USD1.2 billion, which would allow greater recovery for American’s creditors than the Dallas-based carrier’s standalone business plan. American has tabled a plan for USD3 billion in financial improvements by 2017 based on USD2 billion in cost improvements and USD1billion in revenue enhancements based on 20% capacity push from its five cornerstone markets: Chicago, Dallas, Los Angeles, Miami and New York.

The next move for US Airways is to convince the nine members of American’s unsecured creditors committee that its plan will produce a more favourable outcome than American’s standalone plans. Union members hold three of the positions on the committee along with Wilmington Trust, Bank of New York Mellon Corporation, Pension Benefit Guaranty Corporation, Boeing and Hewlett-Packard (HP). American placed a 200 aircraft order with Boeing last year, and has contracted Hewlett-Packard in the development of a new reservations system platform. Although American split last year's 460 aircraft order between Airbus and Boeing, Boeing would be hesitant to see the carrier make further inroads in Airbus territory; US Airways, which proposes to manage American if the merger is successful, has in recent times only placed new orders with Airbus. HP likewise would be concerned if the new merger carrier would drop its HP contract – provided, of course, HP or Boeing see merit in US Airways' plan.

US Airways CEO Doug Parker said the carrier is eager to demonstrate to American’s creditors that its plan would result in higher returns than the standalone strategy outlined by American.

American remains steadfast in its goal to emerge from Chapter 11 as a standalone entity, and has dismissed union support for US Airways' plan as posturing. American management and unions now remain locked in a months-long legal battle as American seeks to void labour contracts.

As the contentious process for American to wipe out collective bargaining agreements drags on, US Airways will move aggressively to sway the creditors committee that a merged entity could better compete against Delta and United. In terms of sheer size, the combined carrier would be neck-and-neck in terms of revenue market share. 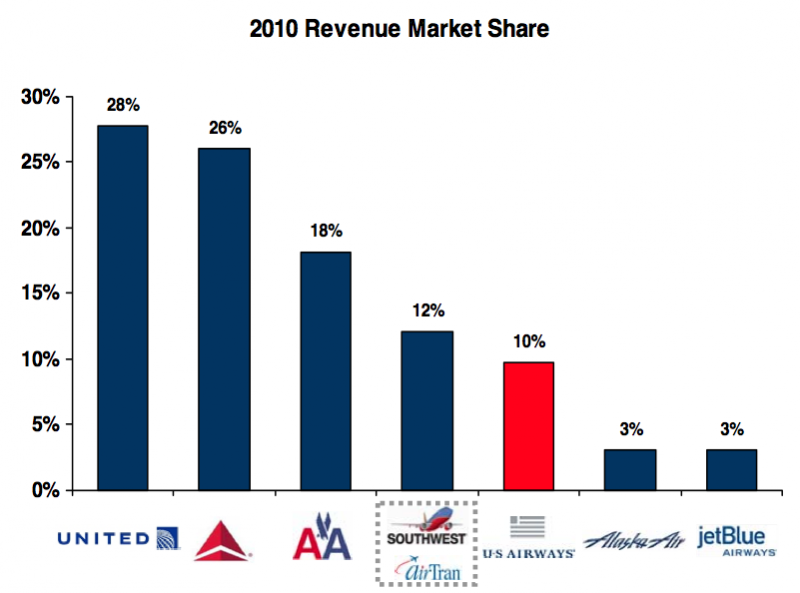