US Airways, JetBlue, UPS and Alaska Air: The good, the (not) bad and the ugly: – SHARE WRAP

THE GOOD: US Airways’ shares soared 10.1% yesterday as the carrier beat analyst expectations with a smaller than expected USD103 million net loss in the first quarter.

More significantly in the minds of investors, US Air’s President, Scott Kirby, stated the “revenue environment does seem to have bottomed out”. Chairman & Chief Executive, Doug Parker, added, “while air traffic on international routes is still weakening, travel in the domestic market seems to be stabilising”. US Air's total revenue per ASM fell 7.2% in the first quarter year-on-year to USD 12.0 cents, while yield fell 10.4% to USD 13.8 cents.

Mr Parker indicated more needed to be done by the industry to match capacity with demand. He stated, “my view is that if we've bottomed but aren't improving, we should probably have less capacity”.

THE (NOT) BAD: JetBlue also beat market expectations with its first 1Q profit in five years. JetBlue shares rose 1.3% on the day. The result was slightly ahead of forecasts, helped by lower fuel costs and strong unit revenue growth, which CEO, Dave Barger, stated “continued to outperform the industry”. During the second quarter, JetBlue expects to reduce capacity by 1-2% and keep full-year capacity growth rate flat (up modestly from the guidance provided in January).

Mr Barger stated, “while there is a tremendous amount of uncertainty in the demand environment we are encouraged by what we see during the peak travel periods as yields have held up relatively well”. He conceded however, “our challenge has been in the off-peak periods when we’ve faced significant pressure on yields and traffic. Sale activity across the industry has become more aggressive in terms of breadth and depth.

He added forward bookings and revenue data continue to be “significantly more volatile than in the past” and visibility on revenues is “once again very limited”. The April comparisons will be helped by the Easter holiday shift and "we expect positive unit revenue growth for the month". JetBlue currently expects its year-over-year PRASM growth for the second quarter to decline between 2-5%.

THE BAD: For the optimists out there expecting a near-term economic recovery in the US, the UPS results would have dealt a blow. Air freight tends to be a better indicator than most. But the company missed first quarter analyst expectations and reported no signs of improvement in the US economy. UPS’s quarterly net income fell by 56% to USD401 million, attributed to a 13.7% fall in revenue

UPS CEO, Scott Davis, stated economic activity deteriorated throughout the world during the quarter and the second quarter is “expected to be modestly weaker than the first”. He added, “hopefully, we will hit bottom later this year and begin seeing growth at the end of the year or early next year in the US”. The company’s CFO, Kurt Kuehn, concurred, stating “economic indicators tell us recovery in the US might begin late this year, but more likely not until 2010, so we expect the second quarter will be another difficult one.”

AND THE UGLY: Alaska Air Group, parent of Alaska Airlines and Horizon Air, posted a net loss of USD19.2 million – which was significantly worse than market expectations, leading to a 12.3% slump in the carrier’s share price yesterday – but better than last year’s USD37 million loss in the same period.

Alaska has been late into the baggage fees game, which has bolstered revenues at most of its rivals. Alaska Air will now charge passengers USD15 to check the first bag from 07-Jul-2009. 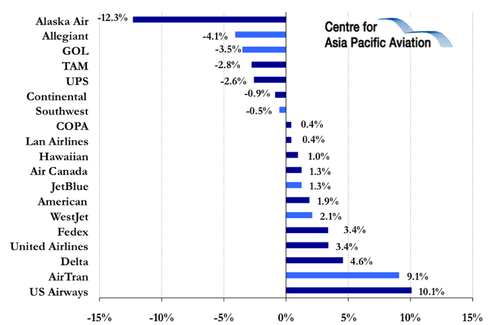