JetBlue (+3.4%) rose after JP Morgan upgraded its rating of the LCC’s stock from "neutral" to "overweight", maintaining a target price of USD9. The analysts stated the upgrade was due to a recent sell-off in the stock. The carrier ended trading at USD7.07.

Southwest Airlines (+0.5%) made a marginal gain, despite JP Morgan downgrading its rating of the carrier from "overweight" to "neutral", also reducing its price target from USD16 to USD15.50. The analyst attributed the downgrade to the stock’s price appreciation and integration risk, as it moves closer to merging with AirTran Holdings. Over the past 52 weeks, Southwest’s stock has traded from a low of USD8.10 to a high of USD14.16. It ended trading at USD13.54. 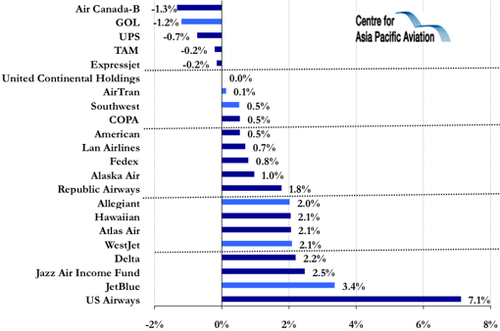