US Airways and Delta announce share sales; American Airlines down

The majority of North and South American carriers’ stocks were down on Tuesday (22-Sep-09), dragged down by a fall in American Airlines, after some hefty recent gains. Stocks also fell on the back of an increase in oil prices (+2.1%), to USD71.39. As a result, the AMEX Airline Index (-2.1%) was down at the end of trading, while the Dow (+0.5%) rose slightly.

The dip in American Airlines' stock (-6.5%) followed its announcement of plans to launch concurrent offerings of 30 million shares of common stock and USD250 million in convertible senior notes due 2014. Moody’s Investors Services raised its rating outlook for AMR Corporation from “Negative” to “Stable”. According to Moody’s, the capital to be raised from the offering, in addition to its recent sale of frequent flyer miles and a sale-leaseback deal, will allow American to meet its commitments for capital expenditure and debt maturities, without having to depend too much on operating cash flow or capital markets.

US Airways announced plans to sell 26.3 million shares of its common stock to Citi, as underwriter in the public offering of those shares. The Company granted Citi an option to purchase up to an additional 3.9 million shares of common stock solely to cover over-allotments, if any. Completion of the sale is subject to customary closing conditions, and the sale is expected to close on 28-Sep-09. The Company plans to use the proceeds for general corporate purposes.

Delta Air Lines meanwhile announced it is planning a private offering of USD500 million in aggregate principal amount of senior second lien notes due 2015. Delta intends to use the net proceeds of this offering for general corporate purposes. The notes will be secured by a junior lien on Delta's Pacific route authorities, slots and gate leaseholds. These assets will also constitute the collateral for the company's proposed senior secured credit facilities and senior secured notes due 2014. Moody’s assigned a 'B2' rating to the second lien term loan. 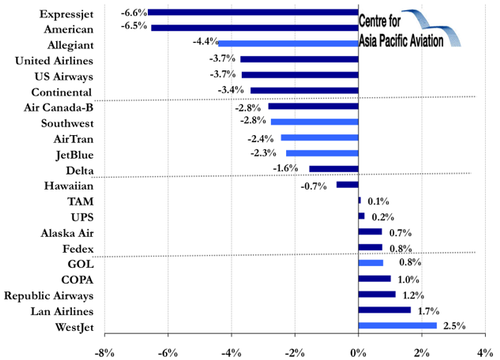