US Airways and American Airlines rise on wider market; WestJet down

Airline stocks were further assisted by the US Bureau of Transportation Statistics announcement that jet fuel prices for US carriers were at their lowest in five years in Jul-2009, at USD1.90 a gallon. Prices were also 50% lower than a year ago.

US Airways (+4.7%) and American Airlines (+3.6%) led the rise, as did JetBlue (+3.6%), following an announcement by SmarTrend during trading that it remains bullish on the LCC’s shares. According to SmarTrend analysts, JetBlue’s stocks are currently trading above their 50 day moving average of USD5.05 and 200 day average of USD5.08. The stock ended trading on Wednesday at USD6.06. JetBlue’s stock price has been steadily increasing over the past three months. 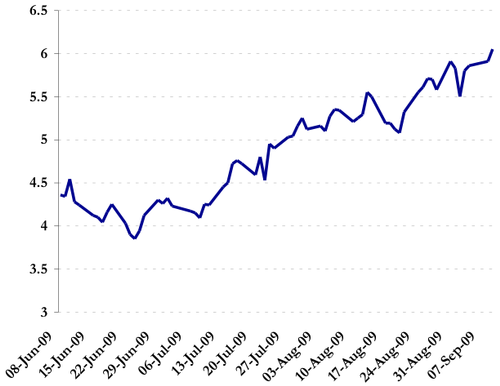 WestJet (-2.5%) stocks meanwhile took a fall before trading was halted prior to the carrier’s announcement that it plans to raise up to CAD172.5 million (USD160 million) in a share issue to help it finance aircraft purchases and for other capital spending.

Fellow Canadian carrier, Air Canada-B (-2.3%) stocks were also down, following a 1% fall in the TSX. Brazilian carriers GOL (-1.3%) and TAM (-1.2%) also fell, despite a slight rise in the Bovespa (+0.1%). TAM announced during the day its MRO subsidiary, Technological Center, has been certified by the FAA to perform maintenance operations on aircraft registered in the US. 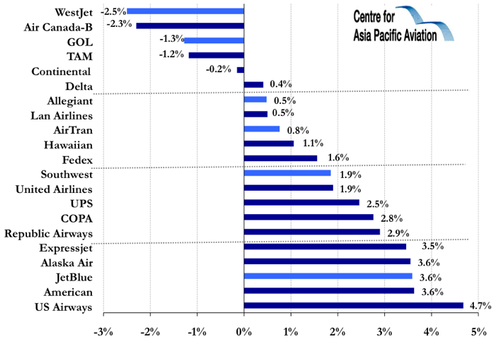