US Airways and Delta seeing signs of Business demand recovery

US Airways (-1.6%) President, Scott Kirby, stated during trading the carrier has already started to recover from the decline in Business demand, reporting a 5% year-on-year growth in Business revenue in Nov-2009. Mr Kirby stated this is “very indicative of demand recovery”.

Delta Air Lines (-0.1%) CFO, Hank Halter meanwhile stated the carrier’s RASM is expected to show signs of growth during 1H2010. The rate of decline in RASM has started to slow over the past few months. The carrier plans to continue to increase revenue and enhance collaboration opportunities with alliance partners.

Republic Airways (-2.2%) was meanwhile down after announcing plans to relocate 300 jobs from Denver to its Indianapolis headquarters in 2Q2010.

Domestic traffic in Chile, Argentina, Peru and Ecuador rose 9.0% as capacity increased 7.1%, resulting in a 1.4 ppts rise in load factor, to 79.4%. International passenger traffic meanwhile rose 15.4%, as capacity increased 9.5%. Accordingly, load factor for the month increased 4.0 ppts, to 79.6%. International capacity was mainly driven by an increase in operations on routes to the US and Europe, as well as on certain regional routes, and accounted for approximately 69% of total passenger traffic.

GOL down, COPA up

LCC, GOL (-2.2%) also fell, despite an announcement of plan to enhance its alliance with American Airlines by finalising a codeshare agreement covering GOL's growing domestic network. American and GOL expect to implement the codeshare as soon as all government approvals are received. 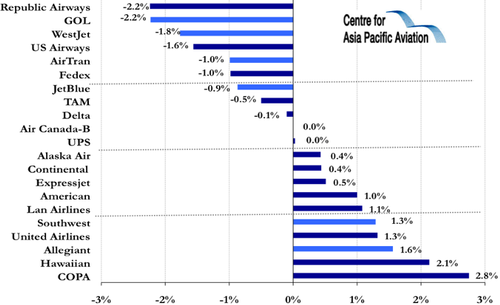