US Airways (-3.8%), American Airlines (-3.6%) and Hawaiian Airlines (-4.6%) led the airline market down on Friday, as a combination of a gloomy ATA forecast for the summer season conspired with some renewed nervousness on Wall Street to dampen enthusiasm for airline stocks. Continental (-3.4%) and United (-3.3%) were not far behind.

The Air Transport Association of America issued its projections for the three months of Jun/Aug-2009, anticipating 150,000 passengers less travelling each day domestically than Summer 2008 (-7%) and 6% less travelling internationally. 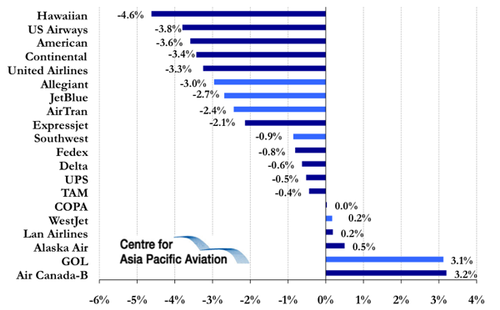 "The main driver behind the anticipated drop in passengers traveling this summer is the ongoing global recession, which continues to crimp demand," said ATA President and CEO James C. May. "The weak economy has forced additional aircraft out of the marketplace, so despite fewer travelers, planes will remain near full. Even with fewer flights and the airlines' heightened level of preparedness for summer travel, we remain concerned that delays may be inevitable due to the combination of an aging air traffic control system and convective weather period."

"The current air traffic control system can be transformed in just a few years by accelerating key components of NextGen procedures and technologies that can begin to deliver immediate benefits. A widely cited congressional study estimated that delays cost the economy $40 billion annually. A modernized, satellite-based system could bring that needless expense down significantly. Congress, working with the Obama administration, should seize this great opportunity by establishing a strong, forward-looking national aviation policy now."

And the Association also coyly mentioned the increasingly unpopular baggage rules, saying potential travellers to "Check with your airline for baggage and other amenity policies and plan accordingly." - in other words, make sure you know how much it will cost per bag and if it is cheaper to notify the airline in advance that bags will be carried.

As a predominantly leisure airline and therefore likely to suffer from US summer slowdown, Hawaiian stocks lost, even though a judge ruled against Mesa Air's application to acquire the Aloha Airlines name, now unemployed since the carrier collapsed.

Although Hawaiian has benefited from the cessation of the three-way fare war, the market is still soft.

Judge King, ruling on the application by Mesa, was clearly unimpressed by Mesa's previous behaviour, a factor which influenced his decision. He said: "While no cases have been found with comparable facts, it is difficult to imagine a court overlooking what Mesa has done and putting its stamp of approval on Mesa's subsidiary, go!, becoming Aloha. Mesa succeeded in inflicting great harm, not only upon the Aloha corporate entities, but also upon thousands of Aloha employees and their families... Now..Mesa seeks to perfect its wrongdoing by becoming Aloha."

But Hawaiian carriers rely on visitors from the mainland. In the past, the majors have used the Hawaii route largely to allow frequent flyers to burn points. Now that aircraft are so full and bottom line economics are so weak, there may be greater reluctance to fly aircraft on frequent flyer points - so that the traffic flows will thin.