US Airways, AirTran other US airlines slump as demand down, fare war begins. US airline share wrap

The exodus from the Wall Street Casino was palpable, as all factors conspired to make airlines the bad smell of the week. It is not an aroma that is likely to dissipate quickly.

From Perfect Storm to....errrr, Good grief, What do we do now??

Last year people talked of the Perfect Storm for the industry, as oil prices soared.
But, now, adding to higher oil prices (New York jet fuel prices are up 8.1% over the past week), we have:

Continental for example announced this week that its Feb-2009 yields dropped 12.8% year on year, despite flying about 6% fewer seats in the period.

Predictably and inevitably, other airlines are moving quickly to match Southwest's fares.

The market clearly judged that the granddaddy LCC would fare better than its competitors in a price battle, as Southwest's shares (-1.9%) were least affected after it lit the fuse.

The airline share price falls come against the background of a sustained - in current terms - period of strength on Wall Street, where the Dow Jones Index has remained positive for a week. 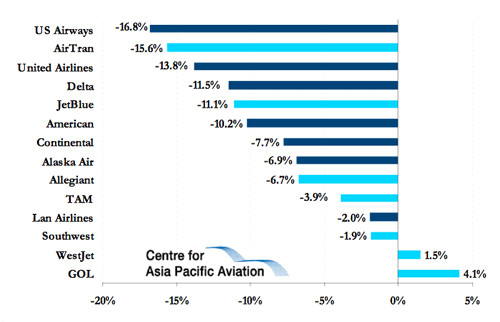