US Airways (+4.3%) made the highest gain of the day after Thomson Reuters reported analysts on average expect the carrier to report a profit of USD1.16 per share on USD3.2 billion in revenue. The carrier also expects profits for the full year.

American Airlines (+1.9%) was also up ahead of reporting its 3Q2010 financial results on 20-Oct-2010. According to Thomson Reuters, analysts on average expect the carrier to report an adjusted profit of USD0.32 per share or USD106 million, on USD5.8 billion in revenue.

The carrier reported a net loss of USD359 million for 3Q2009. This was the result of big charges to write down values of aircraft that had been sold or put in storage.

Delta Air Lines (+1.1%) is also expected to report strong results. It will commence the US airline reporting season on 20-Oct-2010.

Elsewhere, Latin American airlines led the decliners for the session, as the Brazilian Bovespa (-0.1%) slipped. However, Chile’s IPSA (+0.3%) made a marginal gain for the day. 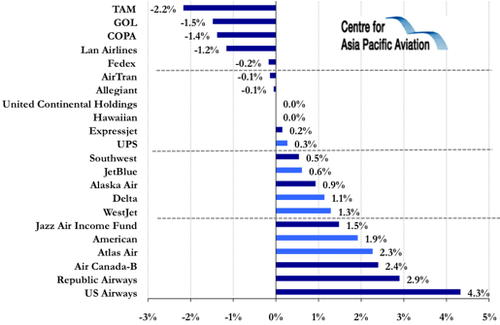