US airline stocks mixed, TAM and GOL up with Bovespa

North and South American carriers’ stocks were mixed on Friday (11-Oct-09), with the AMEX Airline Index (+0.4%) ending the day ending trading up slightly, as oil prices edged up to USD71.77 per barrel in New York. Stocks were partially assisted by a rise in the wider market, with the Dow up 0.8%.

TAM (+3.8%) and GOL (+2.6%) were up at the end of trading, following a positive day for the Bovespa (+0.5%), as investors saw signs of improvement in the Brazilian economy, amid improved corporate results. The Bovespa surged 4.7% over the week and closed above 64,000 points for the first time since Jun-2008.

Meanwhile GOL, announced its global offering of 38 million preferred shares, including preferred shares in the form of American depositary shares (ADS), by the Company and ASAS Investment Fund, the Company's controlling shareholder, was priced on 08-Oct-2009, raising USD347 million for the carrier.

Southwest (-1.4%) stocks fell the most on Friday, ahead of the LCC’s announcement of its 3Q2009 financial results on 15-Oct-2009. US carriers are expected to post another round of losses for the quarter, despite more positive stock results over the period. 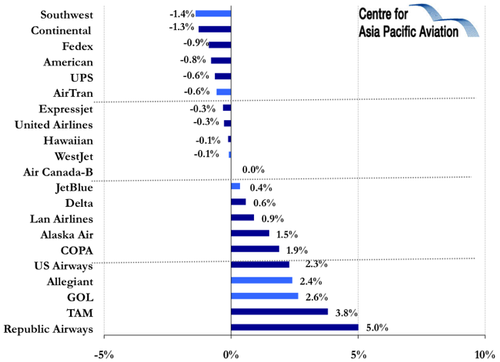