UPS and FedEx continue rise; LAN up on traffic results

LAN Airlines up on improved traffic results for Dec-2009

Hawaiian Airlines (-1.8%) continued to drop, after analysts at Jesup & Lamont stated the carrier’s Dec-2009 traffic results did not meet expectations. The analysts has expected traffic growth of 8.0% for the carrier during the month, but Hawaiian reported only a 3.7% increase in demand. As a result, Jesup & Lamont adjusted its EPS forecast for Dec-2009 to a profit of USD0.14 per share. The analysts did not adjust its FY2010 EPS estimate of USD1.44 per share for the carrier. 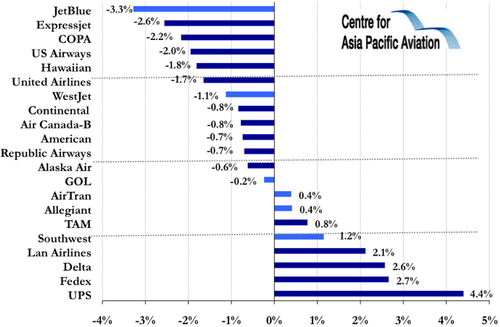