Global airline, airport and aviation supplier shares across the world were hit yesterday, 6-May-2010, amid elevated nervousness in economic circles over debt issues in Europe. Despite a better outlook generally for aviation, as strength appeared to be returning to forward bookings, any threat of economic softening is disproportionately harmful to airline stocks.

United, SAS and GOL suffered the largest drops, but rises in any part of the aviation sector were rare, from the US, Europe, South America to Asia and the Middle East. The New York Stock Exchange’s Arca airline index shed 10.4%; after reaching its highest level since mid-2008 in April, as analysts pumped merger prospects. The index is off 21%.

Europeans were least badly hit, with markets mostly closed by the time the near-1,000 point slump in the Dow Jones index occurred. SAS, whose heavily discounted share issue earlier this week was a little oversubscribed, saw its price slump accordingly, by 10.8%. But others, including the big three, of British Airways (-2.1%), Air France-KLM (-1.9%) and Lufthansa (1.3%) were less badly affected, after steep falls earlier in the week. 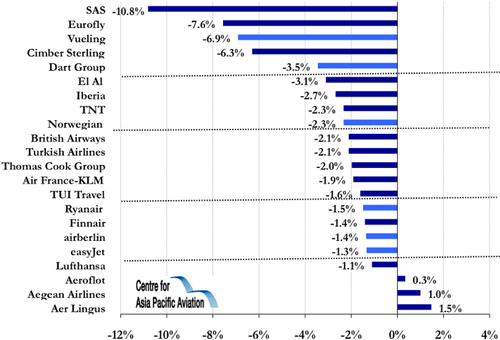 The carrier has announced a codeshare deal with SkyTeam leader, Delta. 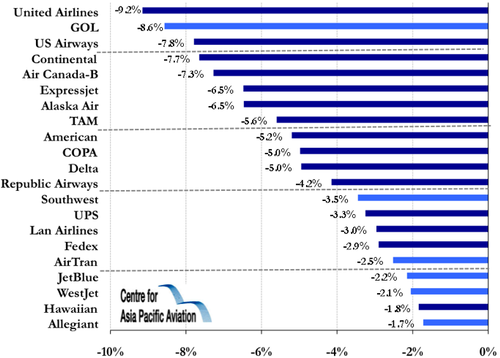 Africa and the Middle East airlines

Along with Jazeera (see below) and Kenya Airways (-1.8%), Royal Jordanian, which earlier this week offered a cautious outlook with expectations of only a “slight” profit as higher fuel prices began to pinch, was slightly down. South Africa’s 1time was the only stock to show a positive result on the day. 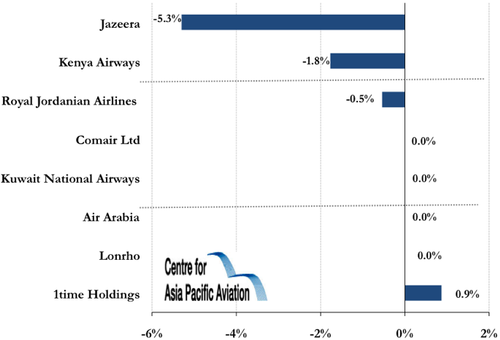 Most low-cost airlines fared reasonably well in the soft conditions, with the exceptions noted earlier, of GOL and Vueling.

In the Middle East, Jazeera, which is being confronted by steep competition from full service and low-cost airlines alike, lost 5.3%. Dubai based LCC, flydubai, yesterday announced substantial discounts across its network. 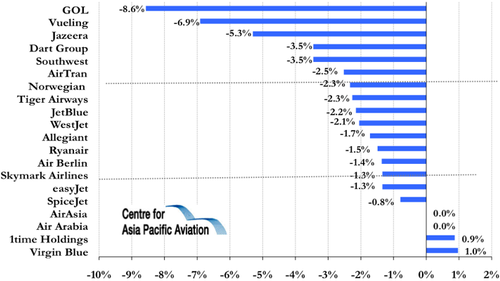 Ferrovial too lost 5.4%. The transport conglomerate this week reported an improved first quarter EBITDA of EUR 512.6 million, with Heathrow traffic up 1.6%, despite harsh winter weather and the British Airways strike – although the week’s closure due to the Icelandic volcano dust cloud has hurt revenues. 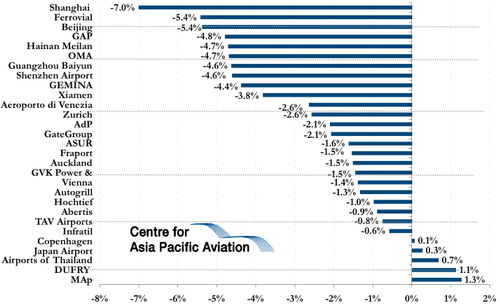 Among the few bright spots in the aviation sector yesterday, India’s NIIT Technologies (+3.6%) yesterday reported a 39% improvement in its order book for the year, although its Mar-2010 quarter results were not inspiring. Revenues for the quarter were up 5% to INR2.4 billion and net profit grew 57%.

MTU Aero Engines shares were up 3.3%. Reporting a modest profit for the first quarter, the German aero engine manufacturer last month projected a steady outlook for the year.

But, as industry stocks generally were battered by debt concerns, leasing companies were worst hit, with hundreds of millions of dollars wiped off collective values. Aerocentury (-9.7%), Aircastle (-9.3%), Aercap (-8.6%), Babcock and Brown Air (-7.1%) and BE Aerospace (-4.3%) were the biggest falls in this sector. 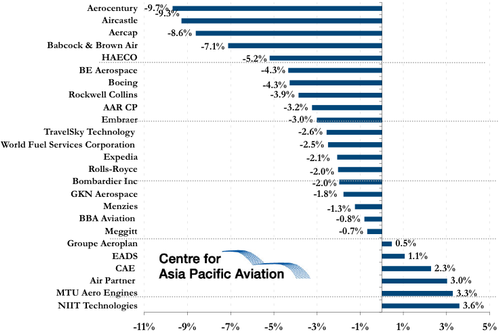