United and Delta bonds trading at or above par; LAN and TAM report improvements in load factor

A slight majority of North and South American carriers’ stocks rose on Friday (12-Mar-2010), as a gain in oil prices (+1.1%), to USD81.24, unsettled investors. The Dow (+0.1%) rose marginally on news retail sales unexpectedly rose 0.3% in Feb-2010. However, the news was coupled with downward revisions of the previous month’s figures.

United and Delta bonds trading at or above par

United Airlines (+2.7%) was one of the day’s biggest gainers, after RBS Securities stated the day prior that bonds issued in 2008 by United and Delta Air Lines (-1.2%) are trading at or above par for the first time, as Business travel demand improves. According to SmarTrend, the carrier is currently above its 50-day moving average of USD14.18 and 200-day moving average of USD8.27.

Meanwhile, competitor, TAM (-0.1%) slipped despite reporting 8.2 ppts and 6.1 ppts year-on-year increases in domestic and international load factor, respectively, for Feb-2010. The rise in domestic load factor was the result of a 21.7% improvement in traffic and 7.2% increase in capacity, while the rise in international load factor rose on a 10.1% improvement in traffic and 1.3% rise in capacity. Both domestic and international yields remained flat month-over-month in accordance with the rational scenario and Company’s expectation.

Copa stock on the way up 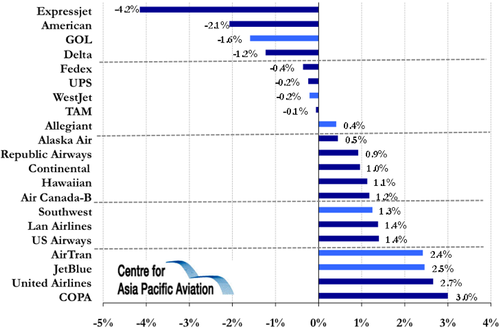