North and South American carriers’ stock fell on a significant rise in oil prices and a dip in the wider market on Friday (30-Apr-2010). The Dow (-1.4%) declined on concerns as to how the criminal investigation into Goldman Sachs will affect other banks.

United Airlines (+0.6%) was up slightly on news it may announce plans to merge with Continental Airlines (-1.5%) this week. Reports have since broken that the two reportedly agreed to merge in a stock swap deal, valued at more than USD3 billion, to create the world’s largest carrier carrying 21% of all US air passengers. United is expected to swap 1.05 shares for each Continental share.

The combined carrier would be based in Chicago with Continental CEO, Jeff Smisek, as CEO and United’s Glenn Tilton as Chairman. The carrier would operate under the United Airlines brand. Most of the merger groundwork was already in place from previous merger discussions in 2008, which Continental walked away from in favour of joining the Star Alliance.

United was previously in merger talks with US Airways (-3.6%) until 23-Apr-2010. US Airways stock took the day’s biggest fall on the news.

Alaska Air (-1.5%) was down despite financial magazine, Barron’s, stating the group has been “fodder” for takeover speculation, following news of United and Continental’s merger plans. According to Barron’s the group “naturally gets caught up in any talk of industry consolidation because its USD1.5 billion market value makes the company digestible for larger rivals”. American Airlines (-1.7%) has been identified as a potential buyer. However, the group has always stated it is not interested in merging into a larger company.

Even without a takeover, Barron’s states the carrier’s shares are still strong. At the end of trading, Alaska Air’s shares were worth USD41.41.

WestJet’s (-0.2%) decline was softened by news during trading it has become Las Vegas McCarran International Airport's fastest growing carrier over the past four years, with the carrier operating B737 equipment with 74 times weekly frequency from 10 Canadian destinations to the airport. The carrier is the ninth largest carrier at the airport, with more than 150,000 passengers in the first two months of 2010, and on track to handle 730,000 passengers on Las Vegas services in 2010, an increase from 200,000 in its first full year of operations. The airport added that while overall passenger traffic is down in 2010, WestJet traffic is up by double digits, with average load factors of approximately 87%. 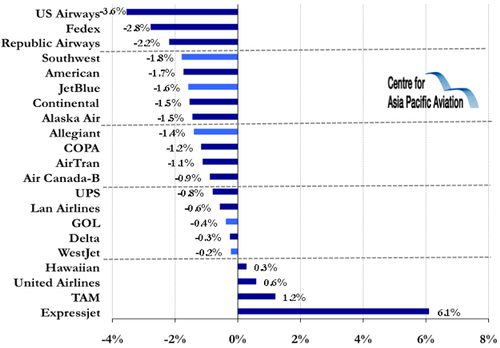