United and American up on analyst upgrades, Continental estimates improved yield for Nov-2009

The majority of North and South American carriers were up again on Wednesday (02-Dec-2009), raising the AMEX Airline Index (+3.7%) to its highest point in six weeks. The rise came despite a slip in the Dow, down 0.2% at the end of trading, but were assisted by a 2.3% drop in oil prices, to USD76.60, following two days of gains. optionMonster suggested that United and Continental were in a "stock surge" as the industry is undervalued for investors.

United Airlines (+12.5%) and American Airlines (+8.0%) were up on Wednesday after analysts at Morgan Stanley increased their ratings for the carriers from ‘Equalweight’ to ‘Overweight’. The analysts stated they expect profitability of US carriers to improve as the economy recovers, also increasing their outlook of the overall US airline sector from ‘In-line’ to ‘Attractive’.

The analysts also cited recent liquidity improvements for both carriers, which it stated would ease investors concerns. American Airlines made a gain of USD4.2 billion in liquidity and aircraft financing in Sep-2009, while United gained USD1.5 billion in liquidity injections for 3Q2009 and early 4Q2009. Morgan Stanley stated in a note to investors, "now that...previously exuberant expectations have normalised as evidenced by price action in the last [one to two] months [versus] improving trends and...the risk of a liquidity squeeze at a major carrier in 2010 has fallen; we believe investors will become increasingly willing to bet on the cycle,"

Meanwhile, Morgan Stanley downgraded its rating for Allegiant from ‘Overweight’ to ‘Equalweight’ and Alaska Air from ‘Equalweight’ to ‘Underweight’, stating they were some of the least leveraged carriers, making them less attractive investments when the economy has fully recovered.

United and Continental are benefiting from a stock surge, according to optionMONSTER, which reported they are benefiting from an improving outlook for the sector. “Call volume in the sector exceeded puts by almost 4 to 1 yesterday, according to optionMONSTER's Heat Seeker tracking program. That was the most bullish ratio for any industry group that traded at least 10,000 contracts in the session,” it said, adding United was the most active.

Delta Air Lines (+7.6%) CFO, Hank Halter meanwhile stated during trading that the carrier expects to report an 8% year-on-year drop in unit revenue for 4Q2009, which advance bookings improved on last years. However, Premium demand continues to remain low, with Business passengers continuing to purchase cheaper fares. With the industry expecting a modest recovery in 2010, Delta also expects unit revenue to rebound in mid-2010. 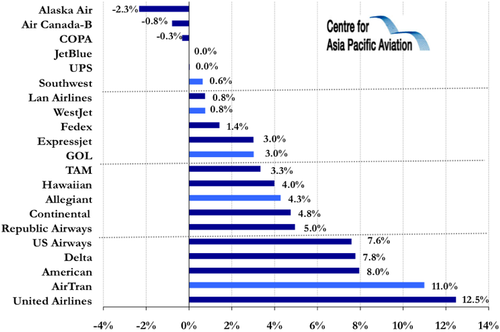