United, American, Continental lead the falls as Wall Street gets the economy jitters

All North and South American carrier stocks faltered on Monday (17-Aug-09), as wider markets fell on fears a recovery in the economy is still far off.

Other markets, including the Brazilian Bovespa (-2.5%) and Canadian TSX (-2.9%) were also down, leading to falls for GOL (-0.5%) and Air Canada-B stocks (-6.1%), respectively. However, the fall in GOL stocks was not quite as harsh as other carriers as it was raised from “underweight” to “equal-weight” by Morgan Stanley.

North American carriers also suffered from Air Transport Association of America (ATA) estimates that passenger traffic will be down 3.5% year-on-year during the Labor Day Holiday period (02-Sep-09 to 09-Sep-09) this year, to 16 million passengers, compared to 17 million in 2008. According ATA CEO, James May, "Economic uncertainty and persistently high energy prices for consumers and businesses continue to impact demand for air travel", with consumers opting not spend money on travel amid the global financial downturn.

The Association also forecast the number of domestic services in 4Q2009 will fall 22%, compared to services in 2000, resulting in 6,600 less flights per day. ATA attributed the fall to beliefs the industry has never completely recovered from the September 11 attacks, in addition to the current global financial downturn and volatile fuel prices. 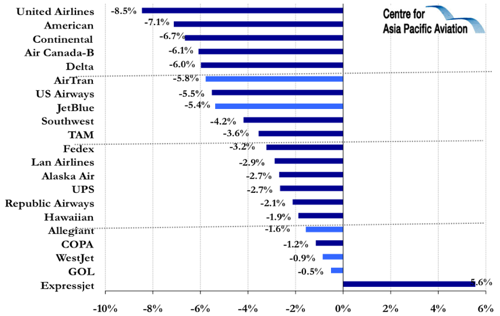