North and South American airline shares rallied again on Wednesday (05-Aug-09), as carriers continued to report more promising traffic results. The rally came despite a 0.85% drop in the Dow, as a result of weak reports on the labour market and service sector.

US Airways (+8.3%) also gained on the back of 1.3 ppts year-on-year increase in load factor for Jul-2009. The carrier’s traffic (RPMs) fell 4.3%, on a 5.7% reduction in capacity (ASMs). Investor enthusiasm was not dampened by US Airways' estimate that PRASM fell by 15% last month.

Air Canada (+0.5%) is considering further cost cuts to improve its balance sheet, including the grounding of some aircraft after Labour Day (07-Sep-09) and temporary job cuts. According to CEO, Calin Rovinescu, the carrier must improve its competitive position, but it is “in a mode now where we have the breathing room to restore the airline to profitability”.

Allegiant (-2.4%) meanwhile reported a fall in load factor, down 5.6 ppts on scheduled services, leading to the largest stock drop of the day. 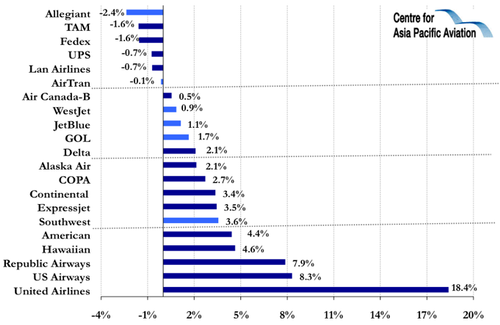 Meanwhile, Toronto-based Porter Airlnes is considering a IPO. Details of a launch date were not disclosed. Funds gained from the IPO would allow the carrier to finance orders for new aircraft, according to CEO, Robert Deluce. The carrier stated it has already received the necessary funding for its new USD45 million terminal project and existing order of 20 Bombarider Q400 aircraft.