United Airlines rallies on back of increased stake by investment group; Republic falls

Republic Airways (-2.3%) took the biggest fall yesterday, ahead of the auctioning of Frontier Airlines. Since then, Frontier has announced Republic was the winning bidder for the carrier, outdoing Southwest. Southwest Airlines (+2.6%) was up, with many believing it would win the bidding auction to take over Frontier.

Alaska Airlines (-1.3%) was down at the end of trading, after reporting its international passenger traffic suffered the highest fall in the first five months of 2009, according to the Bureau of Transportation Statistics (BTS), with traffic down 28% year-on-year. BTS reported a 9.3% year-on-year decrease in passenger traffic for all US carriers in May-2009, the 14th consecutive month of traffic declines, as traffic fell 9.5% overall for the first five months of the year.

Meanwhile, United Airlines (8.2%) led the majority of carriers on the way up yesterday, after Citadel Investment Group increased its stake in the carrier to approximately 7.1 million shares, 4.9% of the issued stock. The group held 900,666 shares in United at the end of 1Q2009. 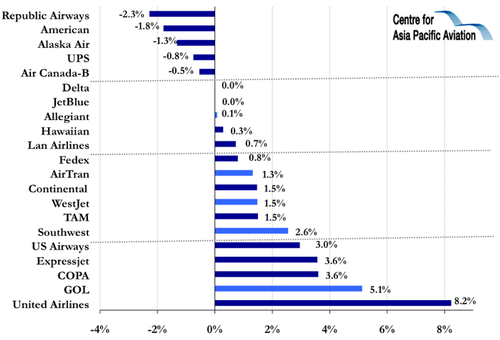