North and South American carriers’ stocks soared on Monday (10-May-2010), moving with the wider market, after European leaders agreed to an emergency bailout package worth almost USD1 trillion for countries shut out of credit markets. Consequently, the Dow (+3.9%) soared, pushed higher by the banking sector, as did the AMEX Airline Index (+7.0%).

Also pushing stocks higher, The Conference Board reported its US Employment Trends Index increased again in Apr-2010 for the eighth consecutive month. The Index now stands at 94.7, up from the revised Mar-2010 figure of 93.9 and up 7.1% from a year ago. However, the rate of growth has slowed in recent months and the job growth rate is "not expected to accelerate much beyond this month's rate, as the overall increase in economic activity is likely to moderate during the second half of 2010".

United Airlines (+8.9%) surged after the carrier estimated consolidated passenger revenue per available seat mile (PRASM) increased 23-24% year-on-year in Apr-2010. Consolidated PRASM is estimated to have increased 5.5-6.5% for Apr-2010 compared to Apr-2008, 2.6 ppts of which was due to growth in ancillary revenues.

The carrier also reported a 1.5 ppt increase in load factor for the month, to 81.4%, as traffic (RPMs) rose 0.6% on a 1.2% reduction in capacity (ASMs). Passenger numbers slipped 0.1%, to 6.7 million. The decline in capacity was the result of volcanic ash cancellations for European services. The carrier estimates to have lost approximately USD35 million from the cancellations.

JetBlue (+6.8%) also gained after reporting a 4% year-on-year improvement in passenger revenue per ASM for Apr-2010. However, load factor for the month was relatively flat, slipping 0.1 ppt, to 80.5%, as its increase in capacity for the month, up 6.1%, slightly outweighed the rise in traffic, up 6.1%. Passenger numbers for the month were up 4.2%, to 2.0 million.

Following the release of the traffic results, analysts at Citi announced they are maintaining a ‘Buy’ rating for JetBlue’s stock, with a price target of USD7. The carrier ended trading at USD5.68.

Continental Airlines (+8.4%) was also up, despite Jesup & Lamont downgrading the carrier’s stock from ‘Buy’ to ‘Hold’ during trading, "due to a limit to positive catalysts" as it awaits approval of its proposed merger with United Airlines. The analysts expect Continental to report earnings per share (EPS) for FY2010 of USD2.60 and FY2011 of USD2.65. 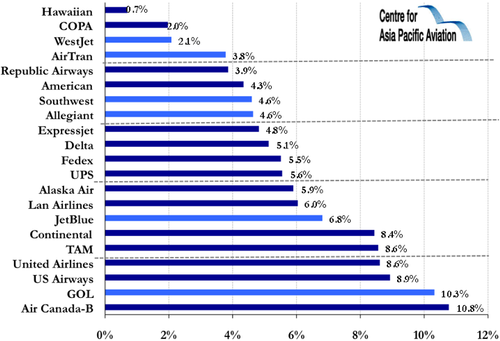