The majority of North and South American carriers’ stocks were up on Tuesday, following the release of improved 3Q2009 financial results from United Airlines (+8.8%), Allegiant (+4.6%) and Hawaiian Airlines (+0.1%). The AMEX Airline Index rose 0.9% as a result. The wider market slipped, with the Dow ending trading down 0.5%.

The carrier also delivered non-fuel unit cost reductions for the third consecutive quarter, with mainline unit cost per ASM (CASM) for the quarter down 1.6% year-on-year, excluding fuel and certain accounting charges, despite a reduction in mainline capacity of 8.2% year-on-year.

Commenting on the results, United Chairman, President and CEO, Glenn Tilton stated "against a challenging environment…we are poised to see better year-over-year unit revenue performance as economies begin to recover and business travel returns," Mr Tilton added the carrier now has “cautious optimism” on early signs Business demand is starting to improve, stating "our network is by design [more exposed] to corporate and premium customers than the rest of the industry, and with the onset of the recession…our network moved from historically outperforming industry unit-revenue growth to modest underperformance…As we see early signs of recovery in business and premium demand, we are also beginning to see our relative out-performance return,"

In its 2009 outlook, the carrier stated it expects mainline CASM, excluding fuel, profit sharing and certain accounting charges for the full year 2009 to be down 0.5% to flat year-on-year. Since the company's original guidance in Jan-2009, it has reduced its projected full year mainline non-fuel costs by more than USD350 million. 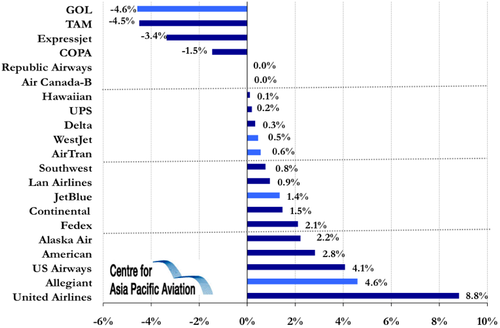