United Airlines down ahead of 3Q2009 results announcement; TAM inches up slightly

United Airlines (-2.8%) dipped ahead of the announcement of its 3Q2009 results on Tuesday (20-Sep-2009). Analysts expect the carrier to report a loss of approximately USD137 million, or USD0.94 a share and a 22% year-on-year drop in revenue for the quarter, to USD4.3 billion, according to a Thomson Reuters poll.

TAM (+0.3%) stocks edged up slightly on Friday after Fitch Ratings assigned a 'BB-' rating to TAM's USD300 million proposed senior guaranteed notes due 2019. TAM's Foreign and Local currency Issuer Default Ratings (IDR) are currently 'BB-' and its National Scale Rating is 'A-(bra)'. The rating outlook is 'Negative' for all of TAM's corporate ratings.

According to Fitch, TAM's ratings continue to reflect the carrier's strong market presence in the domestic air passenger transportation sector. It also factors in the carrier's position as the sole Brazilian airline operator in long-haul routes to Europe and the US, strengthened by several codeshare agreements. Further factored in TAM's ratings is the high percentage of business passengers in its ticket sales mix and the profitability of this segment. 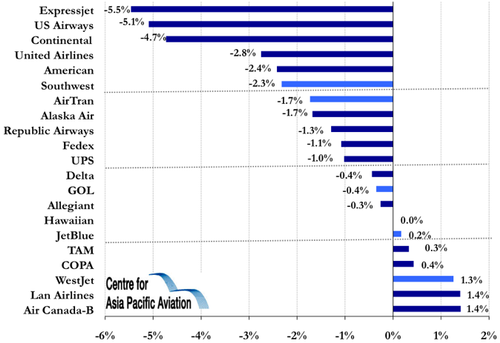