Expressjet (-3.4%) was one of the day’s biggest decliners, as the carrier reported an operating loss of USD17.1 million for the quarter, compared to a loss of USD8.7 million in the previous corresponding period. Expressjet indicated it has a long way to go to achieve profitability from operations.

United Airlines and US Airways reportedly open to merger negotiations

United Airlines (+0.3%) and US Airways (+1.0%) were two of the only three carriers to see an improvement in stock prices on Tuesday, after both carriers indicated they were willing to merge with other carriers. According to a Reuters report, United Airlines CFO, Kathryn Mikells, stated the carrier is open to merging with US or foreign carriers, but is currently pursuing additional alliances in the meantime. Meanwhile, US Airways CFO, Derek Kerr, stated the carrier is open to the possibility of a merger, but only with another US carrier.

President elect in talks to sell further 12% stake in LAN

Meanwhile, United Airlines CFO, Kathryn Mikells, stated Business demand is recovering, but will not reach pre-global financial downturn levels in 2010. According to Mikells, carriers are soon to raise Business fares, as a result of capacity cuts across the industry in 2008 and 2009.

For more on all that’s happening in the American airline industry, why not subscribe to America Airline Daily? Other stories featured in today’s issue include: 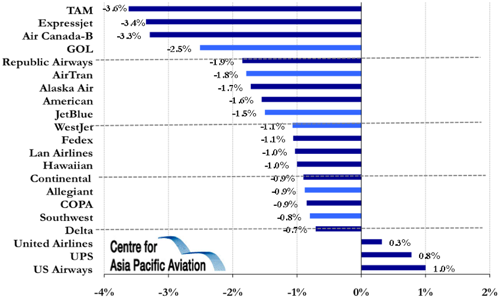