North and South American carriers’ stocks were down again on Wednesday (22-Sep-09), dragged down by US Airways (-13.6%) and American Airlines (-7.8%), following their announcement of plans to raise capital ahead of the low season.

The share sales come on the back of a strong rally in airline stocks over the past month. However, the share sales also suggest carriers are worried about the upcoming Winter, and may struggle if demand does not improve. Fitch Ratings warned carriers are coming to the end of their liquidity reserves and will need “emergency sources of capital” to survive the slower Winter period. The ratings agency added that weak fundamentals in some airlines could lead stronger carriers to commit to another round of consolidation.

Airlines lining up for more cash

GOL announced plans on Tuesday to raise capital through a public share subscription. The carrier plans to issue 17.3 million common shares and the same number of preferred shares. As a result, the carrier’s stocks eased, but not as much as its North American counterparts.

US Airways led the declines yesterday, after announcing plans the day prior to sell 26.3 million shares of its common stock to Citi, as underwriter in the public offering of those shares. Analysts at Next Generation Equity Research LLC stated the offer is likely to provide the carrier with an additional USD138 million in capital, before fees, but the equity issue will dilute 20% of this.

American Airlines followed, after it announced on Monday plans to sell concurrent offerings, subject to market and other conditions, of 30 million shares of its common stock and USD250 million in convertible senior notes due 2014.

Delta also dropped following its announcement on Tuesday that it is planning a private offering of USD500 million in senior second lien notes due 2015.

Next Generation Equity Research stated that United Airlines is also a likely candidate to launch a similar capital raising exercise.

Southwest (+1.9%) was one of the few carriers to rise yesterday, following a rating upgrade by ARGUS to 'buy', with an USD11 price target. 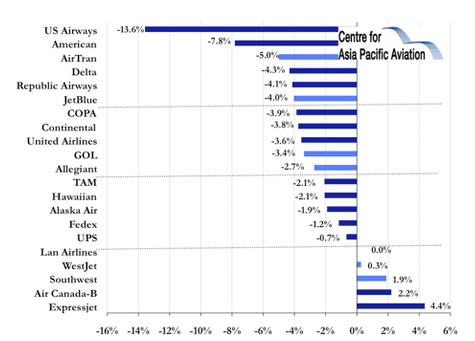