Ultra Low-cost airline expansion is in full flow in Atlanta. Who will be the winners and losers?

Atlanta Hartsfield Jackson international Airport has become a hotbed of ULCC activity in 2015 as both Frontier Airlines and Spirit have made a push from the airport. With their entry, roughly six of Atlanta’s top 10 markets have received an injection of ULCC competition, challenging the airport’s largest airline Delta and second largest Southwest.

Atlanta seems like a reasonable target for ULCCs given its domination by Delta, which controls the vast majority of the airport’s ASMs and seats. It is too early to make any real determination of the ULCC impact in the market, but Atlanta is an interesting testbed given that many routes that the low-cost airlines have entered were previously duopolies controlled by Delta and Southwest.

The ULCC’s competitors in Atlanta have increased seats in many of the markets where the new airlines have launched service, due in part to the summer high season. However, the large network airlines are also poised to compete feverishly, and will not relinquish any of their dominance easily.

Many of Atlanta's top markets get a dose of ULCC competition

Atlanta processed 96.2 million passengers in 2014, up nearly 2% over the year prior. Domestic passenger throughput increased 1.5% to 85.4 million, and international passengers grew to 10.8 million, a 5% increase year-on-year.

Spirit during the last few years has been making a push into legacy hubs on the premise that it will stimulate enough traffic to cover its flights without stealing passengers from other airlines. It has made a big push from Dallas/Fort Worth, Houston Intercontinental (where it has launched several new international routes) and Denver. 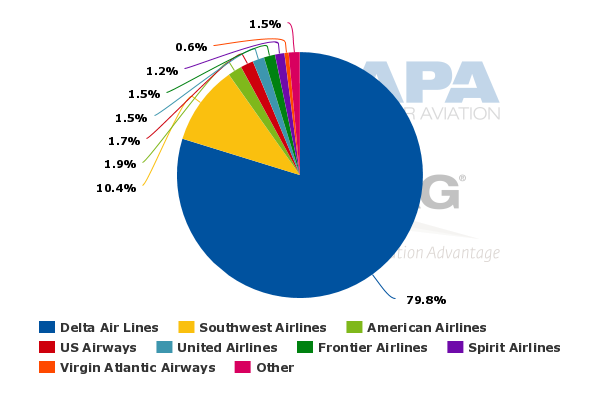 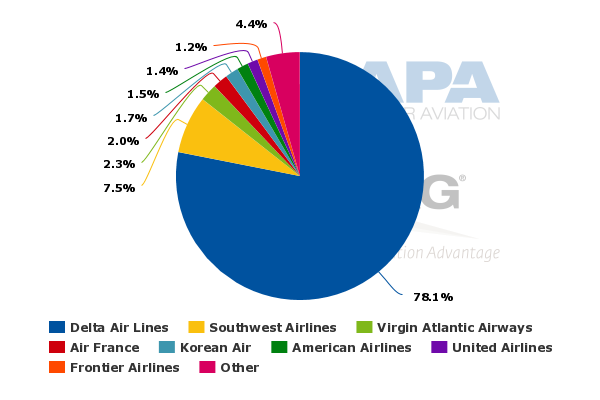 Frontier in its transition to a ULCC has also opted to enter larger markets dominated by larger network airlines including a return to Philadelphia and expansion from Cleveland and Cincinnati.

See related report: Frontier closes in on its ULCC transition, now it is time to prove its staying power

Data from CAPA and OAG for the week of 6-Jul-2015 to 12-Jul-2015 show that ULCCs during the last year have added service in six of Atlanta’s top markets measured by seat deployment – Orlando, New York LaGuardia, Tampa, Los Angeles, Chicago O’Hare and Philadelphia.

Spirit had previously served Fort Lauderdale, Chicago O’Hare and Dallas/Fort Worth from Atlanta, but Frontier has added new service to Chicago O’Hare in 2015. 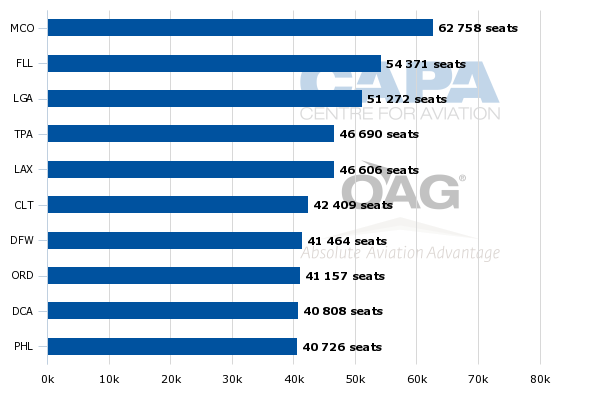 Schedules show that in addition to the entry of Frontier and Spirit, Delta for the week of 7-Jul-2015 has increased seats 9% in Orlando, 2% in Los Angeles and 11% at O’Hare. It seats have decreased in Philadelphia by 5%. Southwest has also increased its seats in markets where it competes with ULCCs, but largely as a result of assuming routes operated by AirTran.

In the three largest markets from Atlanta where they overlap, Spirit and Frontier for the week of 7-Jul-2015 have similar seat shares. In Philadelphia and Chicago O’Hare, each airline represents a 5% seat share and in Orlando, Frontier has a 3% share and Spirit’s share is 4%. Both Southwest and Delta serve Atlanta-Chicago Midway.

In Spirit’s remaining markets it has added from Atlanta in 2015, Delta’s seats have grown 2% in Baltimore/Washington and 7% in Tampa.

On Spirit’s remaining existing service to Atlanta, that includes Fort Lauderdale, Houston Intercontinental, Detroit and Dallas, Delta’s seats are up 3% in Detroit, 12% in Fort Lauderdale, 1% in Houston (United has posted a 38% increase at its Houston hub) and down 7% in Dallas Fort Worth. Overall seat counts between Atlanta and DFW have dropped 11%.

American’s seats have decreased 8% and Spirit’s 50%. Much of the decrease is driven by Southwest introducing a significant amount of capacity from Dallas Love Field after the dissolution of the Wright Amendment, which has created some overall pricing pressure in the market.

Seats on offer between Atlanta and Dallas Love Field have jumped 338% year-on-year for the week of 7-Jul-2015 driven by Southwest adding service on the route and Delta increasing its seats by 116%. Delta has a 49% seat share and Southwest has a 51% share. Love Field is closer to the Dallas city centre, and competition for business travellers on the route has intensified now that Southwest has entered the market.

Southwest and Delta serve Houston Hobby, where overall one-way seats are down 5% year-on-year to 10,186. Southwest has a 59% share and Delta has a 41% share.

See related report: Delta and Southwest become mired in legal tussles at Love Field. Passenger may be the losers

Frontier also serves American’s hub in Miami from Atlanta, operates service to United’s Denver and Washington Dulles hubs and also operates flights to Austin, Indianapolis and New Orleans. American’s seats numbers are flat in Miami while Delta’s have increased 9%. Delta’s seats are up 8% in Denver and United’s have grown 40%. Frontier's seats have declined 10% in Denver year-on-year. Delta’s seats have grown 10% at Dulles and United’s are down 6%.

Delta has increased its seats by 7% in Indianapolis and New Orleans year-on-year. Its seats on Austin have fallen by 2%.

Some of the seat increases by Delta and other airlines are a result of peak summer season travel in the US, but perhaps also show that they are fortifying their strongest markets against new competition.

Atlanta's fares remain above the industry average tracked by DoT

Part of Frontier’s rationale for entering Atlanta was that even with the presence of Southwest, fares in the market were high compared to the average. The latest fare snapshot from the US DoT shows that average domestic fares in Atlanta during 4Q2014 were USD419, compared to USD402 the year prior. The average US domestic fare during the last quarter of 2014 was USD393.

Forward looking, schedules show that Frontier is cutting flights from Atlanta to Cincinnati, Indianapolis and Minneapolis in Oct-2015, but it is not clear if the cuts are seasonal, or if the airline is looking to deploy that capacity elsewhere.

Frontier and Spirit’s expansion in Atlanta is a significant push into a hub that has not lost an ample amount of service from its anchor airline during the last few years. Both Frontier and Spirit have seized on opportunities after United’s pull-down in Cleveland and Frontier has also opted to build up Cincinnati.

Both Frontier and Spirit claim numerous opportunities are ripe in the US domestic market place as fares in some markets remain higher than average. It sounds reasonable in theory, but the US network airlines are starting to respond by matching the fares of ULCCs on the specific routes they offer, which is roughly about one-to-two per market from the large hubs. The large four US airlines have the scale to match those flights, especially in a lower fuel cost environment.

In many respects Atlanta is the key airport to watch going forward to determine how the US heavyweights will respond to new encroachment and if numerous markets can sustain more than one ULCC. Battle has just been joined.