Ugly falls for US Air and United; Continental; GOL up on broker support

North and South American carriers’ stocks tumbled on Tuesday (01-Sep-09), as the Dow (-2%) declined. An early rebound in oil prices was a negative for airlines, even though oil ended trading 2.7% down, at USD68.05 The AMEX Airline Index plunged (-5%).

US Airways (-11.8%) and United Airlines (-8.4%) again led the fall. Fellow legacy carrier, American Airlines (-4.2%) was also down on the back of plans to cut 921 flight attendant jobs, effective 01-Oct-09, suggesting American is still seeking ways to survive the global financial downturn. The carrier plans to furlough 228 staff and place 244 on leave for two months, while a further 449 will take voluntary options, including leave. Almost half of the attendants to be furloughed will be from New York La Guardia Airport.

Southwest (-1.8%) slipped, prior to announcing after trading that it has reached a resolution with the FAA, under which Southwest will replace certain parts on flap exhaust gate assemblies on 82 of its B737-300/500 aircraft by 24-Dec-2009. The carrier also published a new schedule during the day, covering the 09-Jan-2009 to 12-Mar-2009 period, aimed at better accommodating the decline in air traffic demand and seasonal Winter demand levels.

GOL (+0.8%) and Fedex (+0.5%) were the only two carriers to end the day up. GOL stocks took their biggest rise in two weeks, on the back of prospects the carrier will benefit from falling oil prices, according to analysts at SLW Corretora de Valores e Cambio Ltda. Auerbach Grayson & Co. added the carrier “is leveraged to consumer demand and it’s a low cost airline that will benefit from growth of the middle class.” 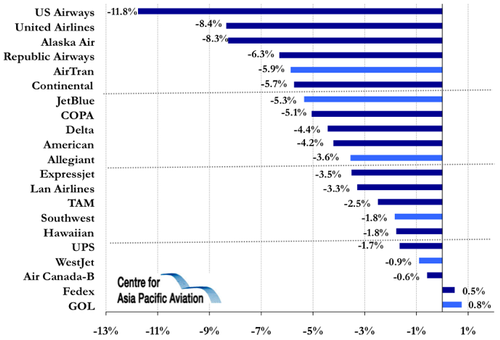