easyJet was downgraded by UBS from “buy” to “neutral”, with UBS commenting, "while we still like the business model and see upside to forecasts, we think the shares will take a breather."

Shares in easyJet slipped 0.5% on Friday, while Ryanair gained slightly (by 0.2%).

Separately, easyJet CEO, Andy Harrison, in an interview with Reuters, stated the carrier is “happy” with analyst forecasts for a pretax profit of GBP170 million in the full-year, after making a strong start to 2010.

Mr Harrison added, "yields will be up in the first-half and 2010 has been good for us so far", but added, "airlines are likely to see subdued demand in 2010 and I don't see a macro economic recovery taking place in 2010". Ancillary revenues, meanwhile, continue to rise, with double-digit growth expected in the current year for the LCC.

In Brazil, GOL’s shares slipped 2.0% on Friday, as investors sold off stocks in the nation’s airlines upon the release of data from ANAC which revealed a 27.5% decline in the average air fare in 2009, down some 30% from their high in 2002. Investors are now anticipating weaker earnings for GOL and TAM as a result, according to SLW Corretora.

NB: You can keep in touch with all the LCC news from around the world every morning with Peanuts Daily. Sign up today - it's free for a limited time! 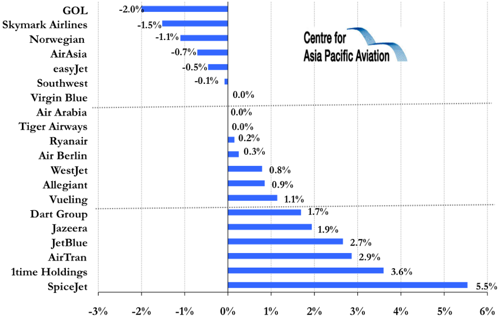