Russia’s state-owned United Aircraft Corporation (UAC) has announced more than USD500 million in investments on aircraft production this month, focusing on the new An-148 regional jet and the under development MS-21 narrowbody.

On 07-Sep-2010, UAC announced plans to invest approximately USD300 million to upgrade aircraft production facilities and construct new plants for the MS-21 programme. This was followed by an announcement that the company plans to invest USD232 million in development and production of the An-148. UAC, which will co-produce the aircraft with Antonov, has already invested USD360 million in the programme.

UAC subsidiary Irkut has taken over sales responsibility for the aircraft. The company is targeting sales in Russia and the CIS, as well as in developing markets in Latin America, Africa and Southeast Asia, and the India Sub-continent. Leasing companies are also expected to order the aircraft. Irkut has forecast the aircraft could take 10% of the global market for 61-99 seat regional jets over the next 20 years, leading to sales of USD6.5 billion.

UAC is also reportedly in negotiations with Syria to sell two Tu-204 aircraft, manufactured by its Tupolev subsidiary. The Tu-204 has not sold particularly well, with sales limited to Russia and the CIS, with just a handful of customers outside the region. The deal could help to save the Tu-204 production line, which peaked at ten aircraft per month in 2008.

Meanwhile, more news has emerged on a possible takeover of French aerospace manufacturer, Latecoere. Spirit AeroSystems is reportedly lining up for a takeover of the company. French media have reported that Spirit executives have scheduled talks with Latecoere’s new Chairman, Pierre Gadonneix. Mr Gadonneix has been appointed with a mandate to find a buyer for the company. He stated last week that Latecoere “must not exclude any scenario” and he has held discussions with "more than one" potentially interested party.

EADS has ruled itself out of any acquisition or rescue of the company. Chief Strategy and Marketing Officer, Marwan Lahoud, stated that EADS will not acquire Latecoere and “won't go further in rescuing it”. 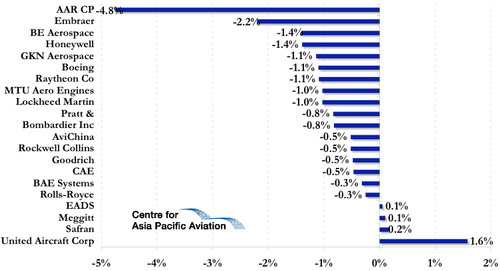 World Fuel Services gained 2%, having recently closed its public offering of eight million shares of common stock, at USD25.00 per share. The underwriters on the offer exercised an overallotment option to purchase an additional 1.2 million shares. Following deductions, the offering raised approximately USD219 million, including the overallotment option. The company intends to use the proceeds of the offering for general corporate purposes, which may include potential acquisitions. 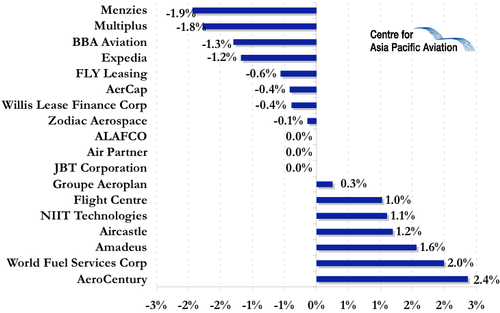