The latest international air traffic report from IATA (for Jan-2010) confirms the industry is recovering as a whole, but there is a growing divergence between the ‘Haves’ (ie strong economies, traffic growth) and the ‘Have-nots’ (tepid economies and traffic growth). IATA observed, “the pace of the upturn has been quite strong - above the 6% trend - but whether that pace continues through 2010 will depend on the economic recovery widening to include more robust consumer spending in the big developed markets of North America and Europe”.

IATA added, “for US airlines, this weakness is partly capacity driven as available seats have been scaled down across the Atlantic and Pacific markets. European airlines have also been cutting capacity, but demand remains extremely soft, as there is little sign so far of economic recovery gathering strength in this region”.

But growth in RPKs carried by airlines in emerging markets continues to show “robust” expansion. There was a pause in the expansion for the Asia Pacific airlines in Jan-2010, according to IATA, but for those in the Middle East and Latin America, there were “further strong gains driven by solid regional economic growth and some gains in share on long-haul markets”. It added, “African airlines have also started to do better in 2010, having been the weakest region in 2009”.

IATA Director General and CEO, Giovanni Bisignani, stated, “we are starting to see some encouraging signs in demand, albeit with large differences among the regions”.

Worldwide international traffic up 6.4% in Jan-2010 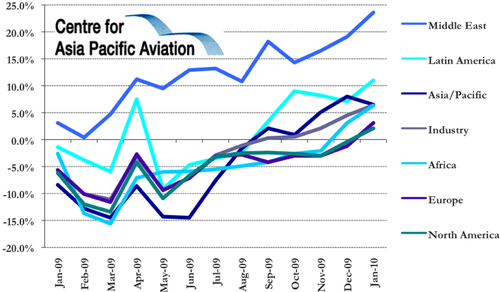 IATA made the following observations about regional traffic performances: 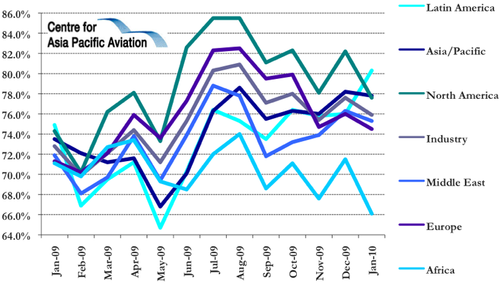 The large increases in year-on-year comparisons reflect a “steady” improvement from the precipitous fall in demand that characterised the early part of 2009, rather than a “dramatic” improvement in January, according to the industry body.

Some 60% of the 28.3% increase in volumes over the 12 months to Jan-2010 was carried by Asia Pacific airlines, according to IATA. In Jan-2010, the region's airlines carried an additional 3.9% of air freight compared with December, as the economic and trade recovery in the region continued to progress.

Latin American, Middle Eastern and African airlines also saw strong air freight growth, reflecting regional economic upturns, with 30%+ year-on-year increases. By contrast, European airlines have seen much less of the air freight upturn. Their air freight volumes are just 7% above end-2008 lows and still 15% lower than early 2008 highs – "largely because of the sluggishness of economic growth and trade within Europe and across the North Atlantic", according to IATA. 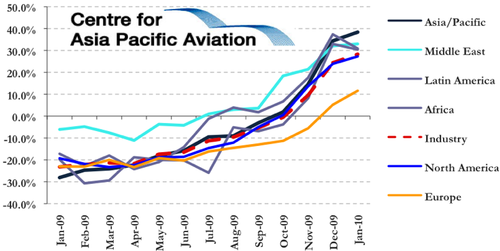 IATA reaffirmed its view that airlines have lost 2-3 years of growth and that while demand is “moving in the right direction”, better volumes do not necessarily mean better profits. “Passenger yields are still 15% below peak and we [continue to] expect 2010 losses to be USD5.6 billion”, said Mr Bisignani.

He added, the constraints of the “archaic” bilateral system limit airlines from being able to respond as normal businesses to market opportunities. Mr Bisignani noted the progress of the IATA ‘Agenda for Freedom’ initiative, which saw seven governments (Chile, Malaysia, Panama, Singapore, Switzerland, the United  Arab Emirates, and the US) and the European Commissions sign (in Nov-2009) a multilateral statement of policy principles focused on liberalisation of the air transport industry. The policy principles support liberalisation of ownership, market access and pricing.

“With each open skies bilateral, we take a step in the right direction. Recovering from the years of lost growth as a result of this crisis is a long and hard journey. Governments should not make it any more difficult by maintaining policies that restrict airlines ability to do business,” concluded Mr Bisignani.