Turkish delights – again. An airline with a mission

Turkish Airlines is one of the oldest airlines in Europe, but it is behaving these days like a young colt. With profit burgeoning to a net of USD548 million for the first three quarters of the year, up nearly threefold on last year, net operating profit also increased by 29% to USD401 million.

So how does it continue to prosper, apparently oblivious to the pain being suffered all around it?

Part of Turkish' strategy has been to link the mineral rich resources countries of west and central Africa and eastern Europe and the high demand Asian countries. But as the global economy slows, this strategy will need to be revisited, at least for the short to medium term. Last week for example the carrier announced some deeply discounted promotional fares from oil producing Nigeria to Europe and Asia, to try to ginger that market.

But Turkish management does acknowledge that there are storms ahead: "Although the fall in fuel prices recently has been encouraging for the airline sector, the fact that this fall was a consequence of expected stagnation resulting from the global financial crisis is a negative factor. However, the Turkish airline sector will continue to grow. Because of the successful performance during this period, our company's expectation for 2008 is positive."

Expansion by acquisition not the way

In Oct-08, the Turkish flag carrier was announced as the preferred bidder for 49% of BH Airlines, Bosnia and Herzegovina's national airline. Turkish has thrown its hat in the ring for most of the airline sales this year, but has not been able to press its claims, partly because it is still in the non-EU zone, but also because it has yet to establish as a global carrier.

But, if it can keep up its financial performance over the next year, it will be seen as one of the more attractive when governments go hunting for buyers for their ailing airlines. (Now that Lufthansa has withdrawn as a bidder for SAS, fellow Star Alliance member, Turkish might be encouraged even to go there.) 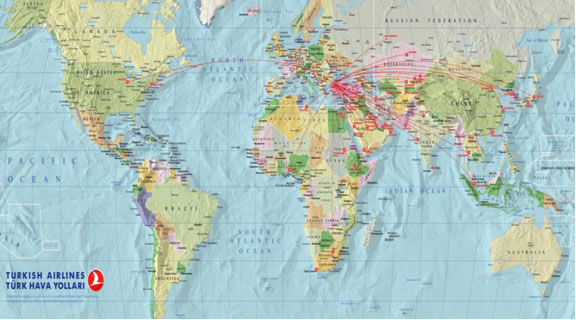 Turkish has a joint venture with Lufthansa, in leisure airline, Sunexpress. The JV last week announce plans to increase its fleet to 20 aircraft, acquiring six new B737-800s of which three will replace older B757-200s.

Its current fleet is predominantly short haul, with only a modest order book at present, leaving it relatively low risk, following a growth spurt over the past 9 month period, when ASKs increased 10.2% to 38.2 billion year on year, and RPKs improved a better 12.6%, to 28.6 billion.

But that is all set to change. The carrier reportedly plans to acquire a further 75-105 aircraft in its planning to 2023.

Meanwhile, as for many other of its competitors, the next couple of quarters are going to be formative for its long term appearance. But this is one airline that appears to have the advantages of geography and regional economy in its favour. If it can keep its risk profile low, while tapping into valuable city pair connections, it may continue to be one of the region's youngest old airlines.