Turkish Airlines to be one of world’s leading carriers; Aeroflot rallies

European airline shares gained on Thursday (18-Mar-2010), as oil prices (-0.9%) fell, to USD82.20. The gains came despite a fall in wider markets, as markets start to become exhausted, according to UniCredit head of global equity strategy, Gerhard Schwarz, in an interview with Reuters. Mr Schwarz stated investors are now waiting for new “significant factors”.

Aeroflot (+4.4%) shares rallied following reports the carrier plans to soon hand over management of Russia’s Moscow Sheremetyevo Airport Terminal D to the airport, and provide airport management with a 52.8% stake in the terminal  In return, Aeroflot may be able to receive an equity stake in Sheremetyevo, but a final decision is yet to be made.

British Airways (+0.7%) gained marginally after it reportedly resumed negotiations with cabin crew union, Unite, during trading. Unite reportedly reaffirmed the carrier must resubmit its last pay offer to avert its planned cabin crew strike, commencing this weekend (20-Mar-2010 to 22-Mar-2010). Mr Walsh reportedly submitted a new offer that was rejected by Unite. Talks reportedly continued into the night, but the two reportedly have no plans to continue negotiations on 19-Mar-2010. It is still unknown whether a deal has been reached.

See related article: Will the British Airways strike light a ring of fire, as flight attendants of the world unite?

Air Berlin (+1.2%) was also up after reporting a narrower net loss for the 12 months ended 31-Dec-2009, at EUR9.5 million, compared to a net loss of EUR83.5 million in the previous corresponding period.

Turkish Airlines expecting to be one of world’s leading carriers

Turkish Airlines (-2.8%) meanwhile took one of the day’s biggest falls, despite Chairman, Hamdi Topu, stating the carrier expects to add 1,000 flight attendants and 600 co-pilots to its staff by the end of 2010 after recently ordering 20 new aircraft. Mr Topu added that, by 2023, the carrier expects to become one of the leading carriers in the world, operating a fleet of 250 aircraft. The carrier currently operates a network of 120 international and 37 domestic operations, with this to be expanded over 2010 and beyond. 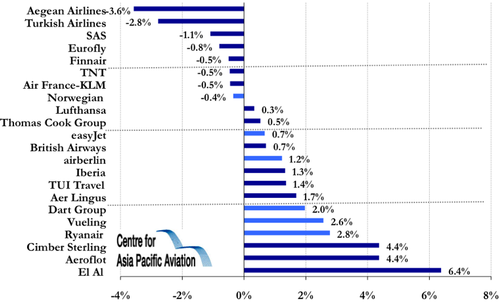