2009 was a very difficult year for the global airline industry in 2009, with IATA estimating combined losses of USD11 billion for the sector – or a loss of roughly USD4.95 per passenger from the 2.22 billion people that boarded aircraft around the world last year. However the stock market performance by this seemingly fundamentally flawed sector was nothing short of spectacular in 2009 – with a few exceptions.

In the Asia Pacific region, Indian and Chinese airline stocks surged as traffic figured showed early signs of recovery from the global economic crisis. Japan’s Skymark Airlines gained 265% last year, as rival much larger rivals Japan Airlines (-68%) and All Nippon Airways (-28%) faltered. JAL had the worst stock performance of the carriers tracked globally by The Centre, and its future very much hangs in the balance. 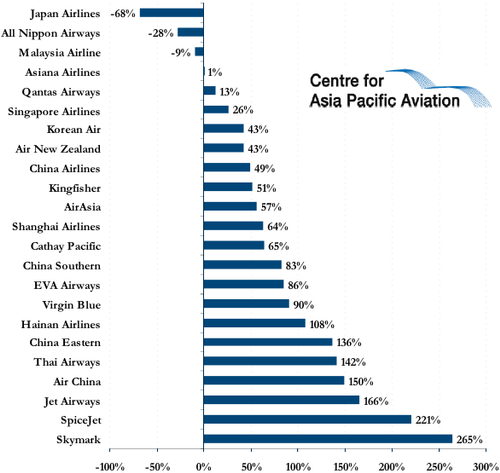 US Airways and Republic struggle, GOL and TAM soar

US airline stocks gyrated throughout 2009, with ExpressJet (+166%) leading the way with some contract wins bolstering its performance. FedEx (+30%) led the US carriers with its exposure to the underlying US economic story, while Southwest gained 27% over the year and Alaska 17%. US Airways (-42%) struggled, while Republic, American and Air Canada all lost more than 30% of their stock market value last year. 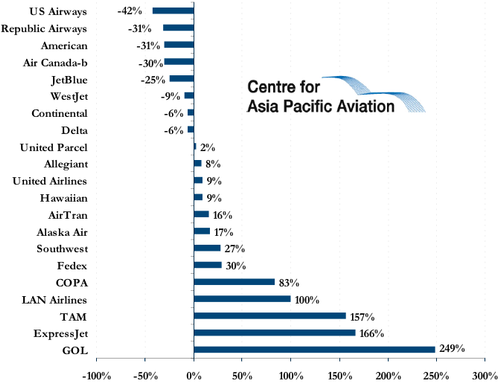 No surprises in Europe: Austrian, SAS and Aer Lingus struggle

Across the Atlantic, investors exited Austrian (-56%) as Lufthansa (+1%) bought in, while the troubled SAS (-46%) and Aer Lingus (-36%) also struggled. Airberlin and Finnair shares also lost around a quarter of their value last year.

A difficult December dragged British Airways’ shares to just a 4% gain over the full year, while Ryanair added 5% over the year and Air France-KLM gained 12%. But the biggest winners were the LCCs Norwegian and Spain’s Vueling (which merged with clickair). Both stocks surged by over 200%.

But saving the best till last, it was Turkish Airlines’ year. Its stock gained 425% last year as it continued to report solid traffic growth and profits and outlined an aggressive expansion plan for the coming years. CEO, Temel Kotil, stated he believes now is the right time to expand and will focus its expansion plans on the Asia Pacific region, looking to launch services to Australia, China, Pakistan, the Philippines and Vietnam. Turkish Airlines plans to handle 40 million passengers p/a in 2012, after handling 26.8 million passengers in 2009. 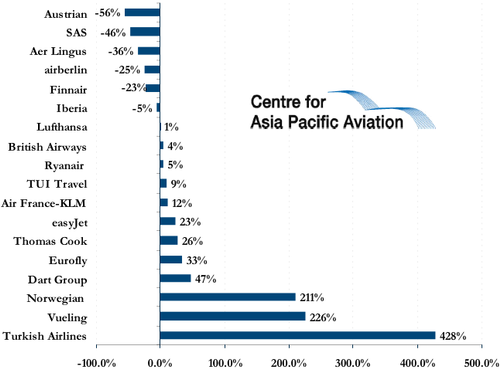 It is difficult to see the outstanding (in most cases) stock performances of 2009 repeated in 2010. The 'green shoots' of economic recovery are yet to blossom in the form of higher fares, improving margins and profits.

But crucially, the higher stock market prices seen in 2009, particularly in the latter half of the year, helped many airlines around the world to raise additional capital to improve their balance sheets. Several more rights issues and capital raisings are planned in 2010, including some IPOs in the Asia Pacific region. The strength of investor sentiment in 2010 remains to be seen, with Tiger Airways' IPO in Singapore later this month to provide some crucial early hints.

Merger activity (or speculation) will continue to drive airline stocks in 2010, with some handsome short-term gains likely. However, rising industrial unrest tipped for 2010 will be a wildcard for airlines and their investors.

Overall, investing in airlines over the long-term remains a risky exercise, with returns well below most other industry segments and high volatility a feature of the airline sector.