Turkish Airlines Chairman Hamdi Topcu stated the carrier is targetting USD8 billion in revenue in FY2011, up from USD6.5 billion in 2010, a target originally set for 2015. The carrier plans to increase seat capacity by 16% in 2011 and increase its fleet to 177 aircraft.

Turkish Airlines, which reported a USD189 million net profit in 2010,  has a goal of becoming one of the top 10 airlines of the world in 2023 when Turkey would celebrate the 100th anniversary of the foundation of its republic. Mr Topcu said the airline shared the 2023 vision with the Turkish government with the carrier to focus on developing with global connections and direct flights to all points by this time. Mr Topcu stated the carrier plans to “make Istanbul the hub for flights and help the THY become a crucial cargo carrier”. 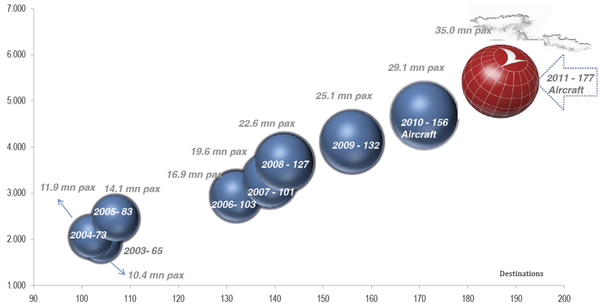 Turkish Airlines, in its Mar-2011 investor presentation, stated it handled 6.7 million passengers in 1Q2011, an 8.7% year-on-year increase. The carrier reported 5% growth in domestic passengers to 3.2 million and 12% year-on-year growth in international passenger numbers to 3.5 million in 1Q2011. The carrier stated it had a 57% international market share to/from Turkey and a 54% domestic market share in Jan-2011. 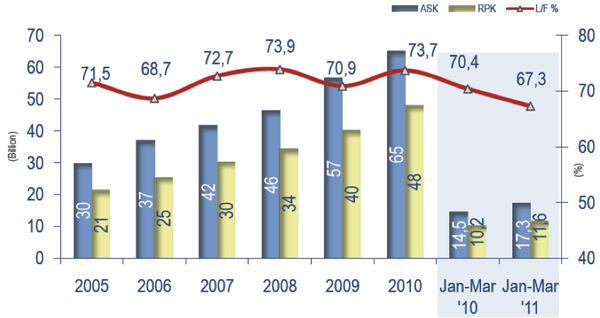 Turkish Airlines stated it ranked fourth in passenger numbers, fifth in terms of capacity (ASKs) and sixth in terms of traffic (RPKs) share among Association of European Airlines member airlines. 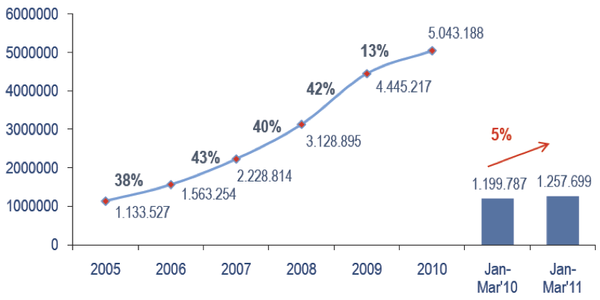 Turkish Airlines stated its total fleet reached 163 aircraft with an average age of 6.4 years as of 31-Mar-2011, increasing the carrier’s seat capacity by 27% year-on-year. 10% of the fleet is owned, 51% under financial lease and 39% under operating lease. 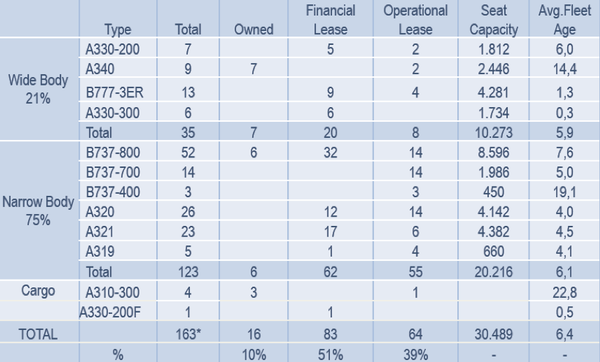 The carrier plans to increase its fleet size over the next five years with the addition of 105 aircraft. As part of this, the carrier converted options for 10 A321-200 and 15 B737-800/900ER aircraft into firm orders as of Mar-2011. Total PDP payment for the new firm orders will be approximately USD459 million of which USD55 million has already been paid as of Apr-2011. 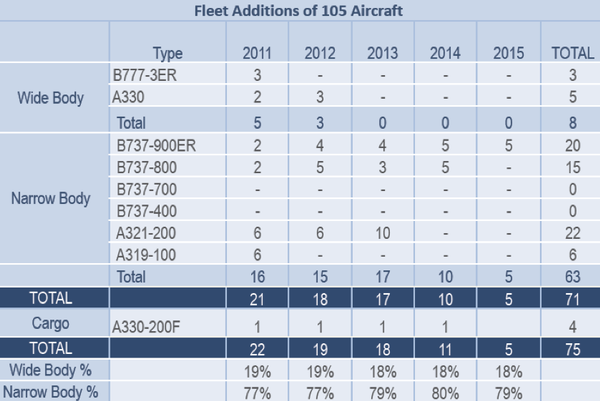 Turkish Airlines fleet and capacity additions and exits: 2010 to 2015

Airbus VP Chris Buckley in Apr-2011 stated Turkey's airlines will need to add 480 aircraft to their fleets over the next 18 years to accommodate the projected increases in the number of flights through the country. The 480 aircraft would likely include at least eight A380s and would have a list price of around USD50.5 billion.

Airbus anticipated that airline traffic to/from Turkey will triple in the next 18 years and has increased by 55% over the past two years. Domestic traffic has quadrupled in the past seven. Mr Buckley added that Istanbul’s strategy to position itself as an international hub had worked well, increasing the number of transit passengers along with domestic and international passengers. Transit traffic has increased five-fold over the past five years, Mr Buckley stated. Turkish Airlines is a "huge part of this growth", he said. Airbus also stated plans to construct a third airport in Istanbul was a sensible plan and signals the increase in traffic.

Turkish Airlines stated its fuel expense per ASK declined in 1Q2011 and is lower on average compared with its peers. As the carrier expands its fleet with new aircraft, the carrier will continue to reduce its average fleet age and hence increase its fuel efficiency.

Mr Topcu also said that around 10 foreign carriers made offers to buy Turkish Airlines, without giving further details. Turkey’s Government is reportedly most likely to sell down its 49.1% stake in Turkish Airlines in 2012 as privatisation work has yet to commence. No method has reportedly been selected for the stake sale and the timing has also yet to be decided.

Mr Topcu also stated the carrier has expressed interest in 12 foreign merger and acquisition opportunities and has particular interest in Russia and Africa. The carrier is also reportedly expected to invest in the mainline operations of JAT Airways, with negotiations to reportedly commence as early as the end of May-2011. It has been reportedly that JAT Airways may be split up under its partial privatisation process, with the majority of the carrier to be offered in a tender which could be launched in May-2011.

Turkish Airlines has applied to the Capital Markets Board (CMB) for approval to increase capital by TRY200 million (EUR90.4 million) from TRY1 billion (USD452 million) to TRY1.2 billion (EUR542 million). The capital increase will take place as a bonus issue funded by profit from previous years.