International service frequency increased 25.6% in the half. Total ASKs were up 19.9%, from 25.3 billion to 30.4 billion on an overall frequency increase of 16.5% (implying an increasing average stage length, as the carrier expands its global network). And, significantly, load factors improved by 3.9 ppts, despite this hefty capacity increase. Freight carriage was up a whopping 49.6% for the half.

Having embarked on a quest to fly to many corners of the world, the carrier has recently raised its number of international destinations to 127. See related report: Turkish Airlines moving into Africa: will the country emulate China?

Most of the major airlines shed around 2% of value, falling somewhat more steeply than the respective exchange indicators.

Eurofly shares fell 7.5% on notice of an increase in paid-up capital to EUR13.7 million through the issue of another 714 million ordinary shares. 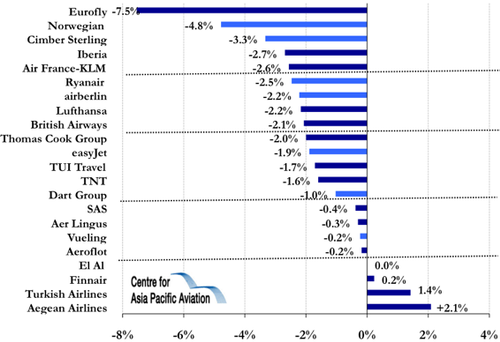