The loss was a surprise to analysts, which stated fleet revaluation and increasing fuel costs may be responsible. Turkish stated in Aug-2010 that an increase in oil prices had lifted its jet fuel costs by 64%.

Iberia (-2.3%) declined despite reporting a 2.4 ppt year-on-year improvement in load factor for Oct-2010 to 83.0%. The improvement was the result of a 9.3% rise in traffic (RPKs) on the back of a 6.2% increase in capacity (ASKs). The carrier stated unit revenue continued to rise, despite the growth of the average stage length (7.3%).

It attributed the results to an improvement in long-haul traffic and revenues. Long-haul traffic rose by 14.8%, while capacity increased by 11.9%. Consequently, load factor improved by 2.1 ppts to 85.0%.

European capacity increased by 0.7% (the lowest monthly decrease in the past two years) and traffic went down by a similar proportion (-0.8%); resulting in a stable load factor of 80.3%.

Domestic load factor was up 7.0%, reaching 78.6%, with drops of 1.8% in traffic and 10.6% in capacity. The load factor increased in all sub-segments, highlighting the routes between Madrid and Barcelona with a 14.2 ppt improvement in the load factor and 4.4% in traffic. 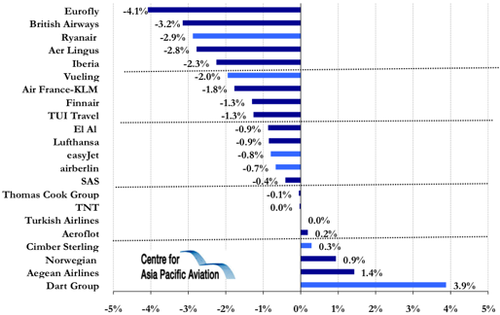