British Airways (+1.7%) was also up on news it is reportedly in talks to reduce its pension deficit of GBP1.9 billion by almost half. The move comes after new rules unveiled by the UK Government, which change the way pensions are calculated by private businesses. Under the new rules, such businesses would be able to increase pensions in line with the Consumer Price Index to generate pension payouts.

Air France-KLM (+0.1%) also ended trading marginally higher. During trading, Air France announced it has signed a codeshare agreement with Saudi Arabian Airlines. The agreement is effective 10-Jan-2011 and will allow the two airlines to offer daily codeshare services between Paris, Jeddah and Riyadh. Under the agreement, Saudia services will be transferred from Terminal 1 to Terminal 2 at Paris CDG and in Jeddah, Air France services will be operated from the southern terminal of King Abdulaziz International Airport. The codeshare agreement between the carriers is in accordance with the provisions of the partnership agreement signed by the two airlines in Jun-2010. 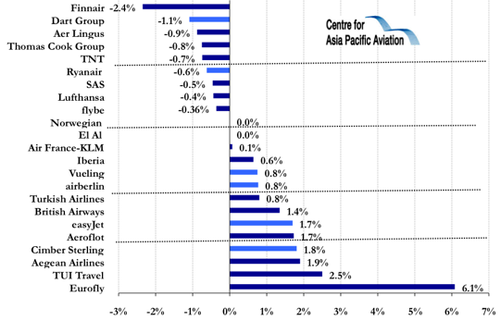